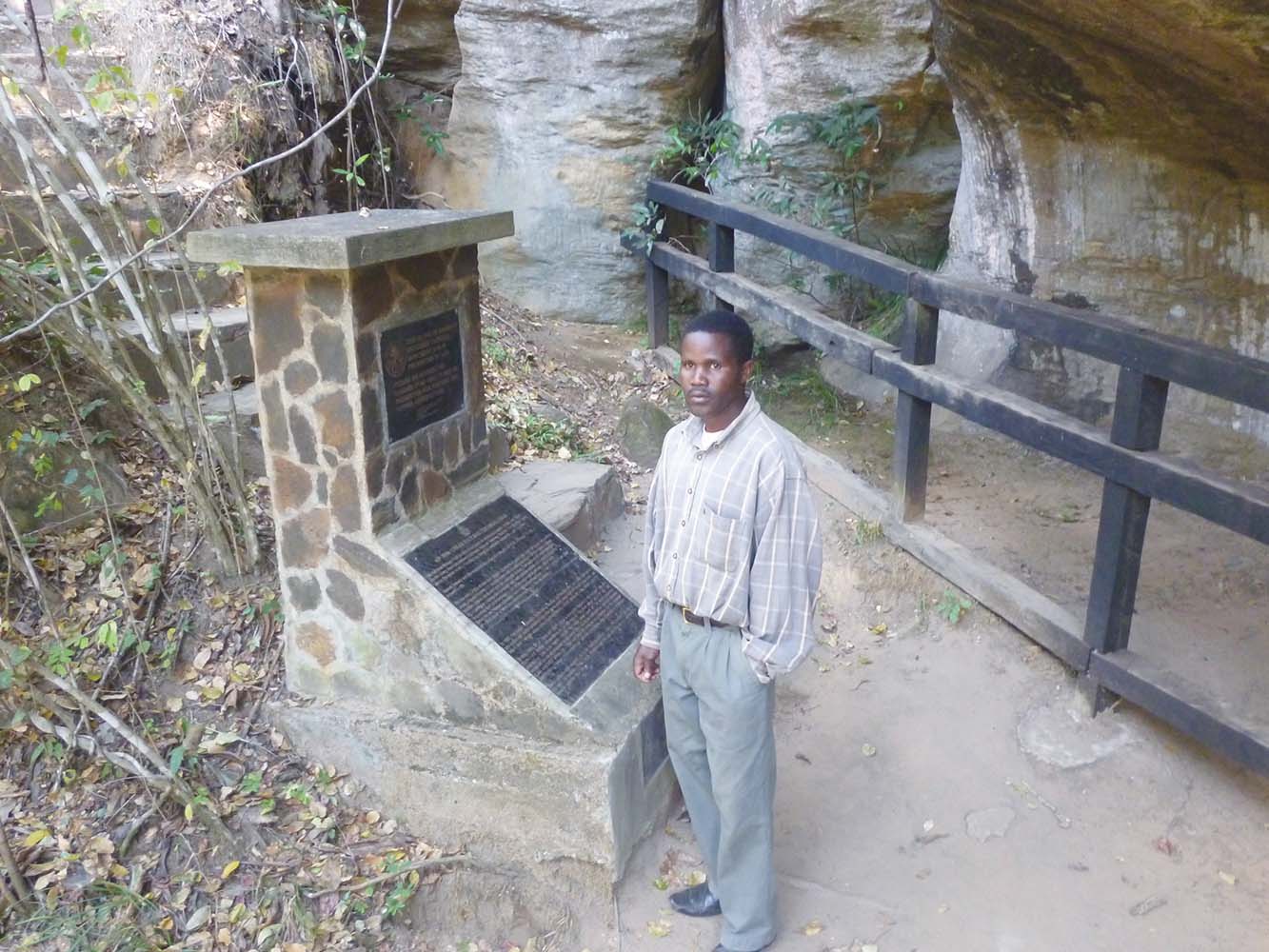 By NKOLE NKOLE
A MYSTERIOUS air surrounds the place as it is approached, even while the sun is overhead in the sky. A dusty road bordered by anthills and dry scrubland provides the passage to one of Zambiaâ€™s little-known natural attractions.
The Kifubwa National Monument, located about six kilometres north of Solwezi town, is an area of 2,590 square kilometres with the Kifubwa Stream Cave at its centre.
It is fully bordered on the west, south and partially on the northern part by the Solwezi Protected Forest Area No1 10.
The site was declared a national monument under Government Notice No 454 of 1964 due to its prehistoric engravings.
At the entrance of the site sits conservation assistant Brian Chinyemba, who is familiar with every nook and cranny of the Kifubwa National Monument and is a reliable source in helping first-time visitors appreciate the significance of the rock shelter to Solweziâ€™s heritage.
The prehistoric locals had always known of its existence but the first whites to actually put it on the map were a Mr Tweed and a Mr Barnard in 1928.
Mr Tweed was Solwezi District Commissioner at the time while Mr Barnard was a geologist at the Old Kansanshi Mine. The first excavation at the site was, however, carried out in 1929 by an Italian scientific excavation led by a Dr Desmond Clark.
He recorded that about one-and-a-half metres of sterile deposits covered the lower half of the engravings under which was a single occupation layer containing quartz tools of the Late Stone Age type.
The tools discovered by the excavators were very small, giving an indication that the people who could have lived in the area were small in stature.
â€œThose people were likely hunter-gatherers,â€ Mr Chinyemba shares. â€œThey solely depended on hunting wild animals and collecting wild fruit.â€
The men were proficient hunters, using bows and arrows with quartz stone arrowheads to aim at animals more accurately.
A unique characteristic about the Kifubwa Stream Rock Shelter engravings is that they are the only engravings in Zambia that are painted.
â€œRock art is in two types,â€ Mr Chinyemba explains. â€œThere are paintings and engravings.â€
Mostly, one will find only one type of rock art at a site. Either there will be paintings only or engravings only.
However, what happened at Kifubwa was that after the Late Stone Age people made engravings on the rock shelter, they also painted in those engravings.
Using hematite, a rock rich in iron which gives off a red colour, the stone agers concocted a recipe that they died with but whose imprint is now left on the Kifubwa Rock Shelter.
â€œAfter the initial excavations, some charcoal was found which was carbon-dated 6310 BC. So roughly, these engravings are more than 6,500 years old,â€ Mr Chinyemba says.
The rock shelter is surrounded by natural bush and in front of it is a faulty gorge. Due to tectonic forces underground, what should have been Kifubwa waterfalls disintegrated to form the Kifubwa mini-rapids and a gorge instead.
As such, the riverbed is very rocky and if someone accidentally slipped in while the water level is high, they could easily get injured or die as they would likely get stuck or entangled by the rocks beneath the water.
Those adventurous enough, however, find themselves stepping onto some of the rocks when the water levels are lower.
As distinctive as the rock engravings are, vandals have not spared the area and some graffiti has found its way onto parts of the rock shelter. The engravings can, therefore, only be viewed from behind a fence to protect them from further vandalism.
A few years ago, while the graffiti was being cleaned using chemicals, some of the chemicals dropped on the engravings and could not come out.
As such, the graffiti has now mineralised together with the rock, making it part of the rock also.
In other spots on the rock shelter, the painted engravings are still visible although they are wearing out due to the passage of time.
The type of rock art found at the Kifubwa rock shelter is also called geometric or semantic art, which is difficult to decipher. Naturalistic art can be more easily read.
â€œWe have had prominent archeologists like the late Dr Desmond Clark, who once visited this site but he couldnâ€™t decipher it,â€ Mr Chinyemba shares. â€œItâ€™s very difficult.â€
Still in its initial phase of development, the Kifubwa Gorge is a spectacular valley form. Tectonic activity within the site is evidenced by tension cracks on the rocks forming the Kifubwa Gorge, especially on the southern slope.
The Kifubwa stream runs through the gorge and the perennial stream shares the same headwaters with the Mutanda River near Kabwebwe, a town in the Democratic Republic of Congo, close to the border with Zambia.
Further downstream of the Kifubwa Gorge, the Kifubwa stream flows into the Mutanda River, which empties into the Lunga River. The Lunga River joins the Kafue River near Lubungu in Central Province while the Kafue River joins the Zambezi near Chirundu.
Despite there being mini-rapids in place of the waterfalls, the sight is picturesque and the sound of rushing water can be heard echoing against surrounding rocks, all adding to the scenic atmosphere.
Investment in the rock shelter could turn it into an international spectacle as evidenced by its great tourism potential. On holidays and at the weekends, it is not uncommon to find visitors to Solwezi taking a drive down to the shelter to bask in the serenity of the Kifubwa monument.
Mr Chinyemba is also quick to note the need for a recreation centre where visitors can take a break after a tour of the Kifubwa site and the opportunity for investment in rock climbing and rock hiking activities there.