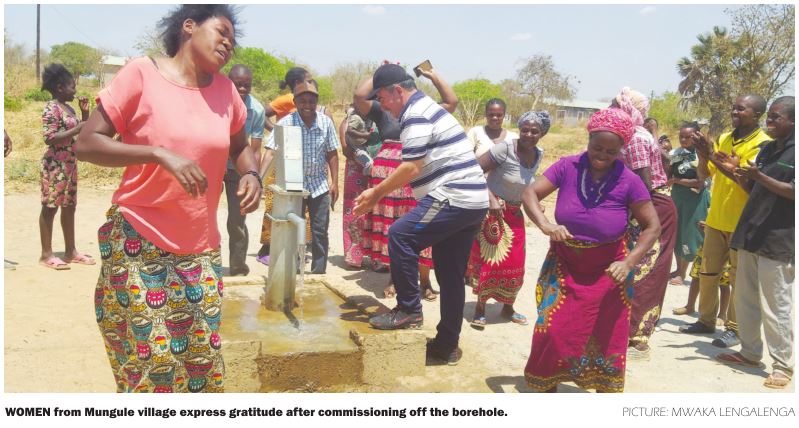 MWAKA LENGALENGA, Lusaka
ACCESS to water has for a long time been a challenge for the people of Katuba Constituency, with women and children having to walk long distances in search of the commodity.
Despite Katuba being close to the capital city, Lusaka, the constituency has remained underdeveloped.
It is this underdevelopment that has compelled Lynda Hang’omba to come to the aid of the constituents.
Born and bred in Katuba, Ms Hang’omba is no stranger to the constituency and this is why she understands the plight of the villagers in the community more than anyone else.
She has, therefore, carried out several projects in the area over the years in order to empower women with the most needed commodity, water.
“I have compared the development in other constituencies to Katuba which is so near to town yet lies under developed.  I feel the pain of seeing how my people are suffering and yet they are so close to development,” she said.
It has always been Ms Hang’omba’s dream to deliver water to the people of Katuba but it seemed without partners to help, her wish would just be that.
She explains that in the past, every village in the constituency had a well, but with boreholes being drilled, the water levels have dropped, which has disadvantaged the villagers.
Ms Hang’omba believes that it is important that Katuba should be developed by indigenous residents to encourage investors to come and invest in the constituency.
Notwithsatnding, her desire to provide adequate water to the people of Katuba finally came to pass after Ms Hang’omba partnered with a Zambian- based Turkish businessman Ahmet Adiydmaio, to drill four boreholes in the constituency.
Mr Adiydmaio has been in Zambia for the past six years and has so far drilled over 20 wells in various communities.
This time, in partnership with Ms Hang’omba, Mr Adiydmaio has sunk boreholes in Katuba for the benefit of all regardless of political affiliation.
Ms Hang’omba says the boreholes are a symbol of unity and a way of restoring the dignity of the women in the constituency.
“When these women go out there to ask for water, sometimes they are insulted, beaten and these are people’s wives and mothers.  Their dignity has been stepped on, so, I believe that through these boreholes, we are restoring the dignity of these women,” she said.
Ms Hang’omba is overjoyed to see the women of katuba enjoy the water and feel part of being Zambian.
She is glad that the women have been saved from drawing unclean water from shallow wells.
Ms Hang’omba believes that the newly installed boreholes in the villages are in line with the new dawn administration’s call to build the economy.
She said the boreholes would help build the economy of the women in the village, as previously, the female folk would spend hours on end looking for water.
However, with the commodity at their doorsteps, the women will now spend less hours looking for the water, thereby having more productive hours for other economic activities.
“If you were spending five hours every day to bring water home, you will now be using 30 minutes to take water home and you will also remain with few minutes to do anything else constructive,” she said.
She has also advised the women to utilise the free hours that they will now have to engage in income-generating projects.
Ms Hangomba has urged the people of Katuba to guard the new boreholes jealously and come up with a committee on how they would manage the borehole and ensure that it lasts long.
Speaking during commissioning of the borehole, Mankalu area counsellor Kelvin Mutende welcomed the gesture and called for other stakeholders to come on board and emulate Mr Adiydmaio in the drilling of more boleholes in the villages, saying there are a lot of rural communities that are still in need of water.
“There are about 43 villages in the area that are in need of boreholes and the dry season isn’t helping matters as availability of the commodity becomes a challenge  in rural communities,” she said.
Water is a commodity that can never be enough but, unfortunately, it is quite scarce in many developing countries like Zambia. Therefore, governments and other stakeholders must invest in this product so that access to quality water can no longer be a challenge.

Christmas as viewed by different people