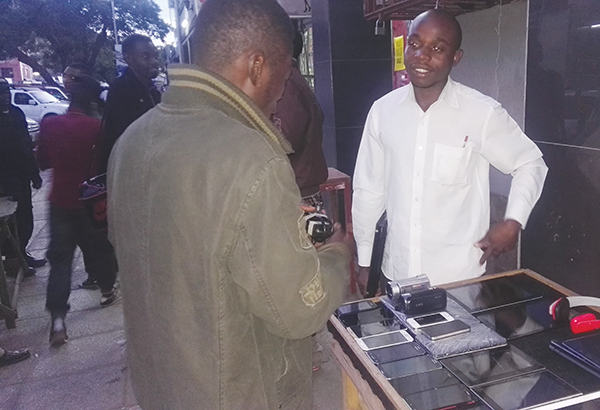 KELVIN MBEWE , Lusaka
At first glance, the place looks like a meeting is underway, but in reality, its actually people from different walks of life going about their daily business right in the middle of one of the streets of Lusaka.

It is Katondo Street or simply “The Street”. This is the place where Zambians, Nigerians, Kenyans, Zimbabweans and other nationals meet to carry out various business transactions such as sale of phones, phone accessories, title deeds, houses, laptops, desktops, vehicles and other items.
The street is gender insensitive. One finds only men smartly dressed with expensive jewelry and other fashion accessories but the other class of dealers appears like ordinary citizens.
Initially, this place was between Cairo and Chachacha roads but it is now approaching Lumumba road due to expansion of activities.
According to hearsay, the business here has been in existence as far back as the 1970’s when it was popular for the sale of cigarettes.
This street has earned a reputation “Doing business at one’s risk” because of numerous complaints by members of the public that have experienced unsuccessful business transactions.
Most of the goods that are sold here are believed to have been bought from thieves at a cheap price and sold at slightly high prices while some of the goods are faulty.
Despite this reputation about the street, people that trade here have families and other responsibilities to take care of. They wake up every day like any other responsible citizen and spend their day searching for customers in an aggressive type of salesmanship.
When one passes on the street, they are either asked whether they are selling what they have or if they want to buy any of the goods on display.
The goods are mostly displayed on makeshift tables.
Government understands the plight of these individuals because clearly it cannot absorb them all in formal employment. For now, they have been left to trade there.
When contacted for a comment on Katondo street activities, Lusaka Mayor Wilson Kalumba said those involved will be relocated to a better place where they can trade.
Mr Kalumba said the move is aimed at cleaning the central business district (CBD) which is chocked by street vendors.
Mr Kalumba said space within the CBD had been reserved for vendors to be relocated.
“We are exploring these alleys within the CBD to see if we can give them to the vendors before the rainy season,” he said.
He added that removing vendors from busy roads was also for their own safety, adding that the new trading places would have proper sanitation.
Back to Katondo street, where survival is only for the fittest and not the weak, Emmanuel Bwalya a 25-year-old orphan buys and sales different accessories on the street. He has been conducting this business for about 6 years and has his personal view of the street.
“I sell phones, cars, phone accessories, change money and lend it. I get these items from people who sell at order price from South Africa and also from those that fail to repay debts” , he says.
He admits that some of the items are stolen.
According to Emmanuel, customers are always available to purchase different items and that android phones are on demand because they are in fashion.
He says Katondo street offers him an opportunity to buy expensive items at low prices and later resale them at very high prices.
“We make abnormal profits, a desperate person can come with a phone like a Huawei P8 which is about K2,900 in a shop and sales it at K1,000 at street price. If I buy such a kind of phone, I sale it at K1, 800 meaning my profit is K800 which I can invest by ordering another phone and life goes on,” he said.
Emmanuel says he makes at least K200 on a good day but not all days are good.
“I use the money I make to pay rentals, clothes, food and other needs because I have no one to pay for my up keep. I would rather be here than anywhere else because the township were I stay has no jobs for people like me.  The level of unemployment is drastic and I do not see myself spending time in the neighbourhood when I can keep busy on the street,” he said.
He has a dream to making capital one day and leaving the street to start his own business such as a liquor store or car dealership.
“I have different people that I look up to who have moved on after raising capital to start a viable business,” he said.
According to Emmanuel, most business transactions are genuine but there are some few bad eggs that have dented the image of Katondo Street.
“Let’s say a thief steals a phone, laptop or any other item of value from a car or from a house break-in and then sells you the commodity, those are the only cases that have raised eyebrows and given people a wrong perception about the street, otherwise people have benefitted a lot from the street,” he said.