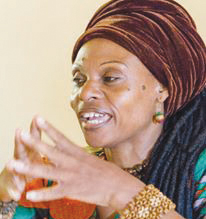 NDANGWA MWITTAH, Livingstone
WITH the major sponsors having pulled out, veteran film-maker Catherine Kaseketi has described the 14th edition of the Shungu Namutitima International Film Festival (SHUNAFFoZ) as a great success.
Kaseketi, who is the festival director, acknowledges that film festivals are expensive to host because of the lack of a national fund.
“I am so grateful that despite the fact that we did not host the festival in 2017 and 2018, the 2019 festival was successful to a certain extent,” she told the Weekend Mail in Livingstone.
“Before the government of Finland stopped funding the festival in 2015, it was easy because they met certain budget lines like workshops, marketing and screenings.http://epaper.daily-mail.co.zm/

Queen up against Queen
Ngoma Awards back