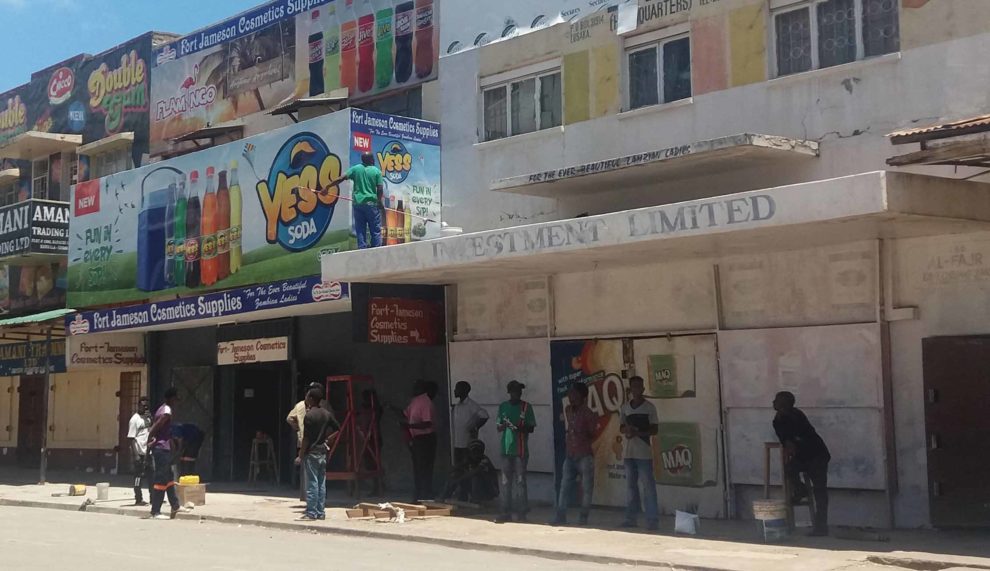 KAPALA CHISUNKA, GLADYS NYIRENDA, Lusaka
WHEN local authorities opted to close down Kamwala trading centre, many traders as well as shop owners at the shopping complex were not happy at the decision.
But it had to be done because of how untidy the environment was.

And with the cholera outbreak, Government could not take a chance because the likelihood of it breaking out at the shopping was also high.

Going shopping to the area was a dread for many shoppers because it was difficult to meander in the corridors which were chocked by vendors.
To make it worse, a number of shop owners displayed their merchanise outside their shops on the corridors, leaving no room with customers.
The vendors who occupied the same corridors inconvenienced the same customers they wanted to impress.
That situation compounded with the insufficient or lack of hygiene and sanitary facilities resulted in the closure of Kamwala trading centre and the market to enable a thorough clean up which also resulted.
The Lusaka City Council (LCC) under the office of the area councillor issued a memo to all shop owners instructing them to redecorate and paint their shops with selected colours approved by the council.
The shop owners were also instructed to clean surroundings and remove their merchandise from the corridors. Luburma market was also shut down leaving most traders and marketeers with no source of livelihood.
Despite the loss of business for the almost 14 days that the complex was shut down for cleaning, shoppers and traders complied with the decision and immediately started cleaning the surroundings, repainting and redecorating.
And like any decision, the situation was like a two edged sword, although in the run long the new look Kamwala would benefit all parties involved.
According to Philemon Banda, a vendor at Kamwala market, the decision was good but it was ill-timed. He complained that because of the loss of business, he had to engage in odd jobs within the complex to earn a living.
“We understand that this move will benefit all of us once all the works are completed but we will die of hunger if it is not done soon.
Maybe what they should have done was to alert us on the closure so that we know what to do,” Mr Band said.
Mr Banda suggests that Government and the relevant authorities should also intensify inspection of public markets and bus stations and ensure they are sufficient and properly working sanitary facilities instead of waiting for an outbreak of cholera.
Another trader identified as Joseph Njovu echoed Mr Banda’s sentiments but urged the government to consider constructing more free public toilets and water points at markets, bus stations and trading centres.
“Yes, we admit this place was filthy. We do not take care of these premises as we should. But the council should also take its rightful place and intensify inspections instead of waiting for a disaster to happen. As the way things stand, unless we change our mindset, this situation will keep re-occurring and we will keep losing out once we are shut down,” he said.
He said the decision to close the trading area had caused a lot suffering especially for them as traders and marketeers.
“Things were terrible when the closed Kamwala trading centre. We are yet to pick up now that we have re opened. And Government has also announced that schools will be reopening so we have too many pressures now that need to be urgently addressed,” Mr Njovu said.
Mr Njovu said most traders and marketeers were anticipating that this is the only time the trading area will be closed as every trader and shop will play their part in ensuring that they keep the surroundings clean
“We understand the reason we were asked to close down. But like many traders here, we hope it’s the last time this is happening. My business had gone down terribly. Before the closure on a good day, I used to go home with not less than K350 to K500. But now I would be lucky if I go with a K40,” he said.
One of the shop owners interviewed at Kamwala’s Madina Investment said the closure was a wake up call to all shop owners to keep their environment clean and uphold high levels of hygiene.
“Obviously, we were reluctant when we were told to close down because of the money that we could lose in business but we opted to comply with the authorities. Now that most of the work has been done, the environment is clean and we do not have goods displayed on the corridors in front of us shops,” he said
He also called on his fellow shop owners to be responsible in terms of how they keep their environment and not wait on the council or an outbreak of cholera to uphold hygiene.
“I can’t even quantify how much we have lost during the time we were close but the end product now is commendable. It is time that as shop owners we took responsibility of our environment,” he said.
LCC gave a 14- day ultimatum to all business shop owners in the Central Business District (CBD) to paint and work on their corridors failure to which they risked having their shops closed.
According to area councillor George Daka, shop owners are expected to decorate and paint their shops in earth colours like dark grey, terracotta, light or dark brown and dark beige.
Shop owners have also been warned against displaying their goods in the corridors.