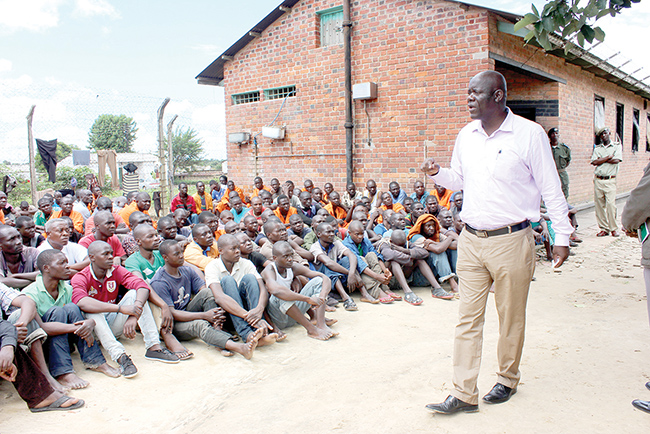 NKOMBO KACHEMBA, Kitwe
INMATES at Kamfinsa State Prison in Kitwe have urged Government to address the problems of poor sanitation and erratic water supply in correctional facilities to safeguard their well-being.
Noah Kalela, speaking on behalf of other inmates on Saturday when Home Affairs Minister Davies Mwila visited them, urged Government not to relent in its efforts to improve the lives of prisoners.
Kalela, who is serving 19 years jail sentence for robbery, said Kamfinsa has inadequate mattresses, bedding and uniforms for inmates.
He said the prison also lacks transport to ferry inmates to court, and therefore, they have resorted to using an ambulance for normal transportation needs.
Meanwhile, inmates at Mufulira, Kamfinsa and Kansenshi state prisons on the Copperbelt, have commended President Lungu for his gesture of pardoning prisoners and giving them a second chance in life.
President Lungu last year pardoned 661 prisoners countrywide duringÂ  commemoration of the African Freedom Day and Christmas celebrations.
He also commuted death sentences to life imprisonment of 332 inmates at Mukobeko Maximum Prison in Kabwe.
The inmates showered praises on Mr Lungu when Mr Mwila visited the threeÂ  prisons.
Kalela described President Lungu as a father for all Zambians including prisoners.
â€œWe know that we are offenders and we have wronged people outside there, but President Lungu has continued to show love by pardoning us. He has given us a second chance to start life all over again and we are very happy,â€ Kalela said.
And at Mufulira State Prison, inmates expressed happiness with Governmentâ€™s passion towards improving their lives.
The inmates however, said they need equipment such as sewing machines and other tools to aid their skills training.
And at Kansenshi State Prison in Ndola, inmates praised President Lungu for taking keen interest in their welfare.
Meanwhile, Kamfinsa senior superintendent Joseph KondoloniÂ Â  said the prison has 2,173 inmates against its capacity to hold 1,000 prisoners.
Mr Kondoloni also said the prison experiences excessive load shedding especially during the night, and that the perimeter wire is corroded, therefore posing a security risk.
And Mr Mwila assured inmates in the three state prisons that Government will try to resolve some of the challenges they were facing to make their prison stay comfortable.
â€œI have heard what you have said and I will make sure that I look into some of these issues that you have raised,â€ the minister said.