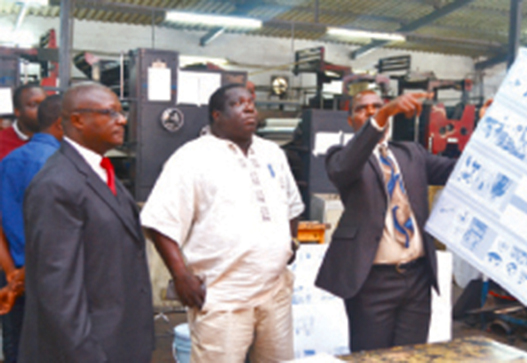 JIMMY CHIBUYE, Lusaka
MINISTER of Information and Broadcasting Services Chishimba Kambwili has appealed to the British Government to assist Government in equipping Times of Zambia, Zambia Daily Mail and Zambia National Broadcasting Corporation (ZNBC).
He said the ZNBC studios need total overhaul while Times of Zambia and Zambia Daily Mail are over-burdened with statutory debt owed to National Pension Scheme Authority (NAPSA) and Zambia Revenue Authority (ZRA), which has adversely affected their operations.
Mr Kambwili said this when British High Commissioner to Zambia James Thornton paid a courtesy call on him at his office in Lusaka yesterday.
He said training of media personnel in the three institutions is another area where Government would appreciate British assistance.
The minister said Government plans to offload some shares in the Times of Zambia after improving the newspaperâ€™s financial standing through recapitalisation and conversion of statutory debt into share capital.
Mr Kambwili said Government remains committed to the enactment of the Access to Information (ATI) Bill and consultations are ongoing.
And Mr Thornton spoke highly of the efforts Government is making to entrench media freedom in the country, citing the establishment of the Independent Broadcasting Authority (IBA) and the ongoing process to enact the ATI law.
He said these are some of the shining examples of Governmentâ€™s commitment to reforming and repositioning the Zambian media so that it plays its full and rightful role in national development.
â€œI am happy to note that Government is committed to media freedom. As a victim of media misrepresentations and misquotations myself, I know how frustrating it is sometimes but it is crucial that Zambia defends its record of media freedom because the benefits are huge in the long run,â€ Mr Thornton said.