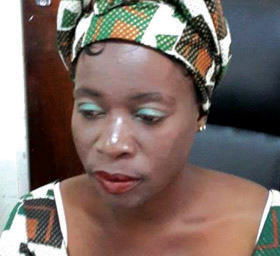 MWILA NTAMBI, Kitwe
MINISTER of Information and Broadcasting Services Chishimba Kambwili has described the death of Zambia National Broadcasting Corporation (ZNBC) staffer Queen Chungu Malama (right) as devastating and a blow to the media industry.
Mrs Malama died at Progress Medical Centre in Kitwe yesterday after an illness.
Mr Kambwili, who visited the bereaved family in Chimwemwe yesterday, said the media fraternity has lost a journalist who contributed to the growth of the industry.
â€œIt is sad to lose a journalist who greatly contributed to the growth of the media industry,â€ Mr Kambwili said.
Mrs Malama is survived by a husband.
And Kitwe district commissioner Chanda Kabwe has expressed sorrow over the death of Mrs Malama, reports MONICA KAYOMBO.
Mr Chanda said in his message of condolences that Mrs Malama has left a big gap in the media fraternity and the family.
â€œThe absence of Mrs Malama will be highly felt in the media industry as she strived to attain excellence in all journalistic duties,â€™â€™ Mr Kabwe said.
He said he received the message of Mrs Malamaâ€™s death with great shock, adding that she has died at the peak of her career.