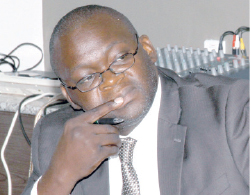 TEDDY KUYELA, Lusaka
ATTORNEY General Likando Kalaluka yesterday told the tribunal appointed to investigate alleged professional misconduct and impropriety against suspended Director of Public Prosecutions (DPP) Mutembo Nchito that the appointing authority has powers to adjust the terms of reference.
This was after Mr Nchito raised three preliminary issues when the sittings resumed and requested to address the tribunal.
But Mr Kalaluka said there is nothing wrong with the appointing authority adjusting the allegations in the tribunal terms of reference.
Mr Likando said the appointing authority has powers under Article 58 of the Zambian Constitution to make adjustments to the allegations which might be more or less.
He also argued that the tribunal should not grant Mr Nchito an application for an adjournment because the State is in a hurry to conclude the matter.
He, however, withdrew the objection to Mr Nchitoâ€™s application for an adjournment to enable him to study the copy of the amended terms of reference.
In his submission, Mr Nchito argued that former Chief Justices Mathews Ngulube and Ernest Sakala, who are tribunal members, should recuse themselves from sittings because of the alleged differences he had with them when they presided over some cases.
Mr Nchito also submitted that the investigations against him should be discontinued because the terms of reference raised by the appointing authority cannot guarantee his removal from office because the allegations do not conform to constitutional specifications under Article 58 (2) and (3).
Mr Nchito said a person holding the office of DPP can only be removed from office on the basis of incompetency, misbehaviour or infirmity of mind.
He also asked the tribunal to conduct the investigative proceedings in public.
Mr Justice Silungwe adjourned the sitting to next week Tuesday to enable the state to avail Mr Nchito with a copy of an addendum from the President so that he could study it.
The President appointed the tribunal to probe Mr Nchito as provided for under Article 58, sub-article (2) and (3) of the Constitution of Zambia.
President Lungu tasked the tribunal withÂ  eight terms of reference that include the probing of the alleged acts of impropriety by the DPP as alleged by members of the public and, among other things, recommend whether the DPP ought to be removed from office as a result of the allegations.