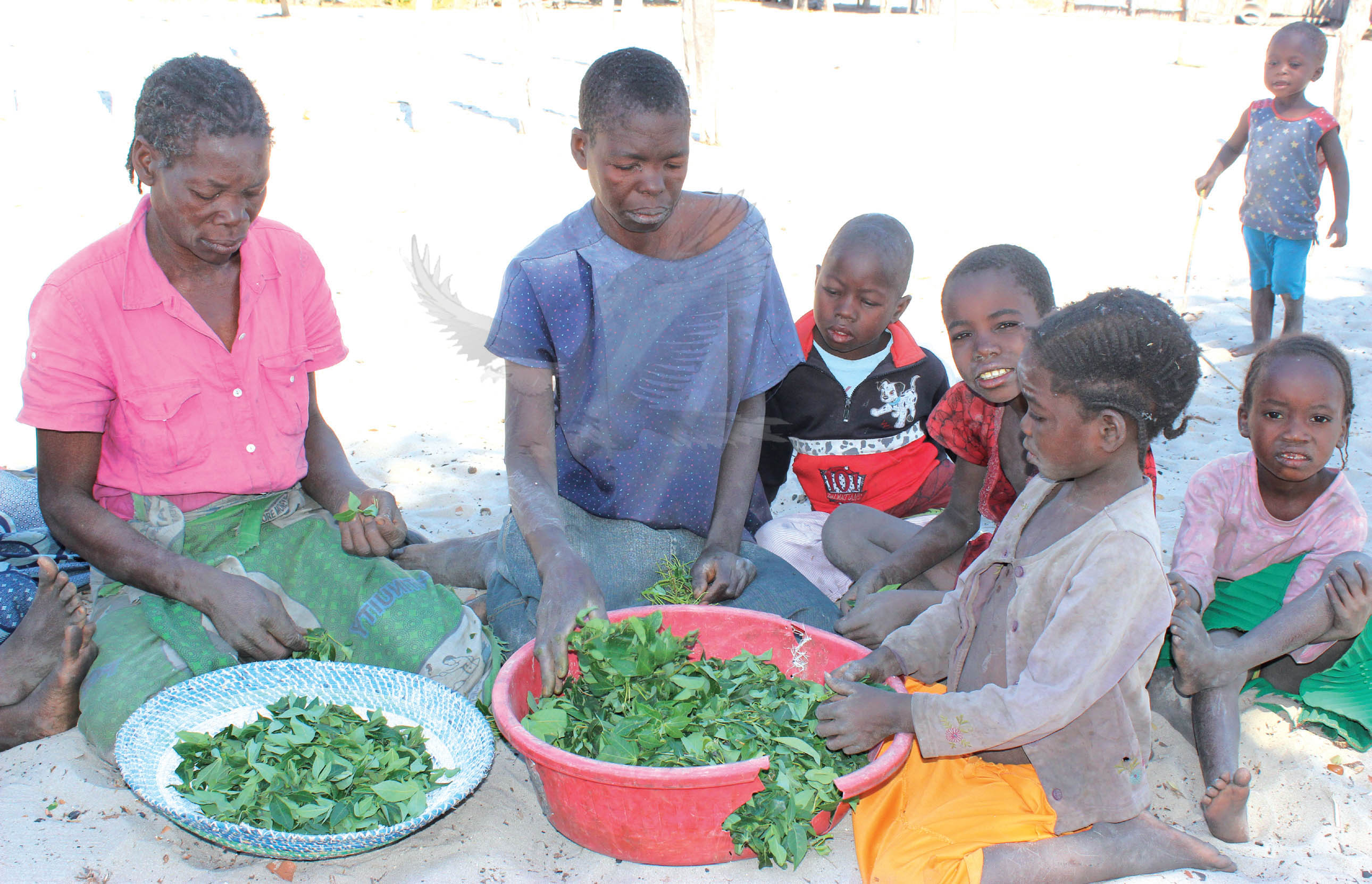 JACK ZIMBA, Kalabo
KALUMBU Mukonda of Liomokela village sits in the soft sand outside her straw-and-mud house preparing cassava leaves. After removing the stems, she pounds the leaves in a wooden mortar and then boils them for about an hour, adding only salt. This will be the familyâ€™s lunch.
Sometimes, she mixes the cassava leaves or shombo with a wild vegetable (delele) to form a gooey meal, or adds the pods from the seeds of the redwood tree called muzauli to make a porridge-like meal.
These are hard times for the family of seven brought about by one of the worst droughts that affected most parts of the country last rainy season. For Kalabo, however, the scale of devastation and misery the drought has brought on many households is hard to comprehend.
On record, this is a district that suffered 100 percent crop failure for rice, which is the main crop grown by most families living along the vast Liuwa plains.
According to Wilfred Chapabuku, who is acting district agricultural co-ordinating officer for Kalabo, 882ha of maize was cultivated in the district in the last farming season with an expected harvest of 35.3 tonnes, but only about seven tonnes were harvested.
As for rice, 791.2ha was cultivated, but the harvest, according Dr Chapabuku, was too little to even measure.
Under normal rainfall, Kalabo district produces over a thousand tonnes of the famous Mongu rice, which finds its way to markets in Lusaka and other urban areas.
In the 2013-14 farming season, for instance, 622ha of rice was cultivated, with about 1,600 tonnes harvested, while 660 tonnes of maize was harvested from the 379.3ha planted.

MWIMO showing what the family will have for lunch.

Stanley Liato is assistant headman for Liomokela village, which lies about 20km west of Kalabo. He says all the 40 households in his village have no food. He is now banking on the mangoes which come into season in November for survival, but he doesnâ€™t know how his family will survive during the critical months of September and October when food is most scarce.
And soon, even the cassava leaves will run out, either consumed by the starving families or by the scorching heat as summer approaches.
â€œThe government must help us with relief food,â€ says the assistant headman.
According to Mr Liato, who has lived in Kalabo for over 60 years, this is the worst drought he has experienced in the district since 1958. And no village has been spared. Even the cassava, which is drought-resistant, did not do very well.
Charity Chishwashwa of Mungomba village is a widow with eight children to take care of. She usually cultivates about two hectares of rice, from which she harvests between 70 and 100 bags. This year, however, she only managed one bag.
I found Charity at a local health centre nursing her son who had been admitted with suspected malaria.
But with no food or money, she is forced to work in-between nursing her son in order to find money to buy food.
She has other worries, too.
â€œI donâ€™t know how I will pay for my child when schools open in September,â€ she says.
Rice is her main source of income.
Charity says all the households back in her village have nothing to eat. It is almost hard to believe her at first. But then, a visit to randomly-selected households in the area confirms her word.
About two months ago, Government, through the Disaster Management Unit under the Office of the Vice-President delivered bags of maize to the district which was distributed as food-for-work.
But Mr Liato says the people in his village only heard about the food.
â€œNo one in this village benefited from that maize,â€ he says.
â€œWeâ€™re hardworking people and we donâ€™t want to always beg from Government. For now we want the government to first help us with relief food before they can give us seeds and fertiliser,â€ says Nyundu Folosi.
Mr Folosi only harvested a few cobs of maize and sorghum, which he has kept as seed for the next farming season.
Meanwhile, Mr Folosiâ€™s wife, Mwimo, has already prepared her shombo.
â€œFor now, we will eat it like this,â€ says the mother of six. â€œBut if we find money, we will buy some mealie-meal to cook nshima in the evening.â€
A small cup of mealie-meal costs K1, and Mwimo needs five cups to prepare a meal for her family.
But in these hard times, money is also hard to come by. Mr Folosi usually sells reeds to earn money, but the cattle herders set fires in the plains, destroying the reeds.
Fish? There is no fish this year, say the villagers.
Kalabo district commissioner, Alfred Miyato, says 80 percent of the food that will come into the district will be given for-work, while the rest will be given to vulnerable groups such as orphans, disabled, widows and the aged in the communities.
He says people should identify projects within their communities that they could work on in order to get food aid.
â€œFrom the time I came here, there is not a single project that was rejected by my office. I approve all projects within a few minutes so that the hunger situation is not felt,â€ he says.
He says more maize will be arriving into the district soon.
According to Dr Chapabuku, earlier projections put the number of households needing food assistance in Kalabo at 15,000, but he says only 3,000 have been included on the list of beneficiaries. The district has a population of about 130,000.
â€œA lot of people have been left out and the food we are expecting will be a drop in the ocean,â€ says the veterinarian.
There are other parts of Western Province that were badly affected by the drought and are also earmarked to receive food aid.
â€œYou know when youâ€™re seated here in the office or out there in Lusaka, you may not realise the impact of this drought,â€ says Mongu district commissioner Susiku Kamona. â€œSome people go hungry for days without a meal, others can only afford a meal in the evening.â€
Lwandui is one of the worst hit areas in Mongu district.
â€œI did find people who were starving, people who cannot afford to have a meal in a day,â€ says Mr Kamona, who recently toured some affected areas.
He says the government will help affected families with food aid until the next harvest sometime in March.
According to Mr Kamona, Government will also provide mealie-meal which will be sold at subsidised prices to people affected by the drought in peri-urban areas to avert hunger.
Itâ€™s past 14:00 hours when I return to Mukondaâ€™s house and I find her with other women preparing some more cassava leaves, but there is still no sign of nshima.