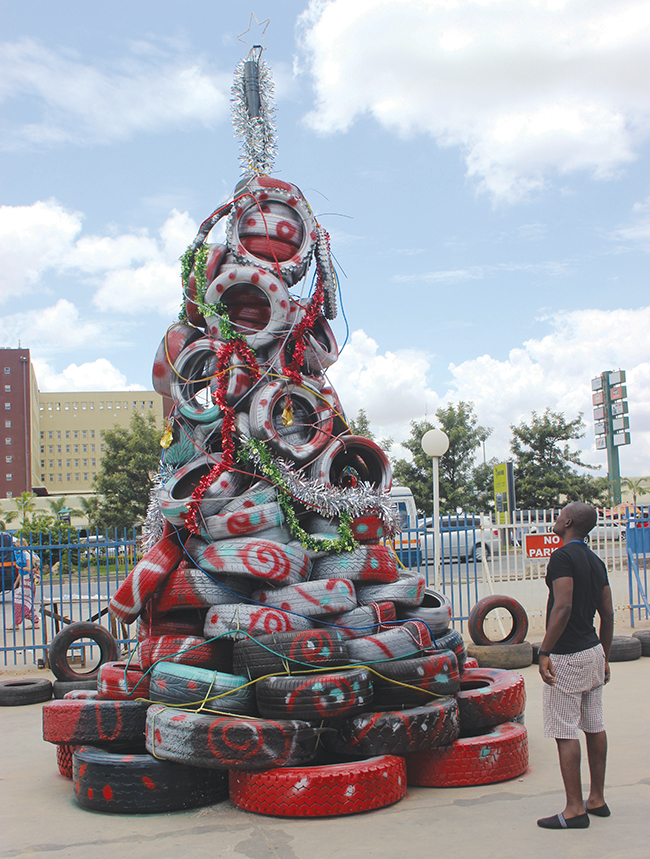 ART YAK with CHANDA MWENYA
LAST year at the height of Christmas celebrations, the public was greeted with a gloomy headline announcing the of loss seven lives of the same family in a road mishap.
A week later, four more lives of another family were lost in similar circumstance.
What was depressing was that the innocent lives were lost for allegedly human error on the part of the drivers.
Christmas being a time of reflection and giving, I was reminded of Kachere Art Studioâ€™s Christmas gift.
At the beginning of the festival season, Kachere Art Studio co-ordinator Alexis Phiri pledged to give Lusaka residents a special Christmas present that would also be a tribute to road carnage victims.
The Kachere Art Studio, walked its talk but its Christmas gift is certainly not like the one you get from Santaâ€™s bag.
Kachere Art Studio in collaboration with TS Tyres has built a six-meters Christmas tree made entirely of discarded tyres.
The giant tree perched at Oddyâ€™s Filling station opposite Arcades Shopping Mall in Lusaka has a representation of tyres from almost anything that moves on the public roads, from bicycles to cars; from to light trucksÂ  to heavy duty trucks.
Alexis, the brains behind Kachere Art Studio has employed art to create lasting impressions on vital social subjects. The notable public installation is the Rhino which has nothing left to write about.
And back to the Christmas tree. TheÂ Â  creation process was also used as a platform to sensitise members of the public on road safety.
â€œThe duty of road safety awareness is everyoneâ€™sâ€™ responsibility, it cannot be left to the Road Transport and Safety Agency alone. Kachere Art Studio realises the immerse potential that art has in transforming the mindset of societyâ€. Alexis observed.
Noticeably, the concerted efforts made by institutions like Kachere Art Studio and the Road Transport and Safety Agency among others are paying-off reducing road carnage and in making the public roads safe all road users the motorists, bicyclist and pedestrians alike.
Despite the number of lives that were lost in road carnage during the festival season, official reports indicates that there was a decline in Christmas Eve accidents as compared to 2014 record.
artyak@rocketmail.com