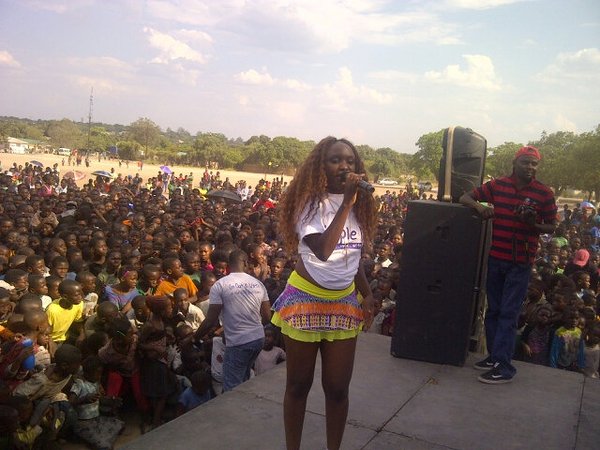 KELVIN KACHINGWE, Lusaka
JOURNALIST-CUM-MUSICIAN Kachanana Simate, who has divided public opinion with her stage antics and suggestive outfits, is looking for dancers, particularly twerkers with a bias towards rhumba dancehall.
Kachanana, who left her job at the Zambia National Broadcasting Corporation (ZNBC) to pursue music fulltime, says she is looking to expand her stage performance crew.
â€œWe are looking to expand the stage performance crew and we want dancers, if you are over 16 years, ready to travel anywhere in Zambia, have a great working attitude and you are fire on the dancefloor, itâ€™s you we want,â€ the self-anointed queen hustler posted on her Facebook page.
Fortunately for her, there are a few willing to twerk for fun and money, as per her specifications when she outlined what she was looking for.
Twerking, to be a little mild, is a kind of dance which is somewhat sexually provocative in a manner involving thrusting hip movements and a low squatting stance.
The dance has been popularised in recent times by former Disney star Miley Cyrus, who came to fame as a clean-cut, apple-cheeked television character named Hannah Montana but who has now been accused of going crazy, with the most pronounced accusation beingÂ  that she has moved from a Disney pop star to a twerking ratchet.
Never mind her outfits, which look to have come out of Lady Gagaâ€™s fashion book.
On the considerable criticism that her rise to the top has raised, Miley defends her actions, saying: â€œI think Iâ€™m representing women in a cool way, because people arenâ€™t used to girls that are just like, â€˜I genuinely donâ€™t care what people think.â€™ And thatâ€™s what guys have always gotten to be, and especially in like a rock industry or whatever,â€ she told a radio station.
Like Miley, you will expect Kachanana to be the last person to be bothered with the opinion of the public jury.
Last Sunday, she posted a picture of herself holding hands with four crew members just before a performance which read that: â€œYes we pray, we love God and we know we are nothing without him. Some of you who have given yourselves the job title of Godâ€™s spokesperson, and also think you are His Assistant Judges, you will faint when you find me at the gates of Heaven, as a door bouncer, chilling nabena angel Gabriel. lol. Have a lovely Sunday.â€
One fan by the name of Jonny De was impressed and said â€œseeing you pray before performing truly made me appreciate just how so so special you are.â€