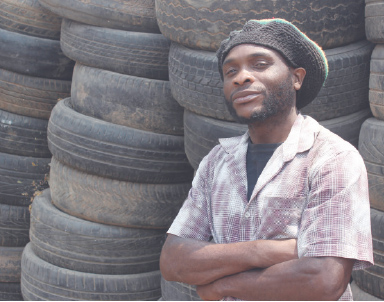 ART YAK with CHANDA MWENYA
IN TODAYâ€™S heavily industrialised world with mountains of solid waste and polluted atmosphere, every effort to save the planet is momentous.
Sculptor Joseph Shakulipa has joined efforts aimed at saving our planet by instilling life in some solid waste, turning them into useful furniture.
Employed in Josephâ€™s work is waste that could otherwise continue chocking the environment.
Although Joseph initially worked with figures of traditional instruments and indigenous utensils where he normally used wood, he is gradually finding firm grounds employing found materials such as metal.
â€œMy works of recycling which I classify as â€˜trash treasuresâ€™ form part of my contributions towards getting rid of unwanted waste that accumulates in large amounts of trash on a daily basis,â€ he says.
Joseph believes in being part of the solution and not the problem in the cycle of solid waste management.
He believes that if solid waste is not managed with the efforts it requires, the damage to the planet will worsen and lead to global warming.
Joseph recently showcased his line of recycled works at Alliance Francaise in Lusaka.
If you thought the final place for your used motor car tyre was your back yard, you will probably have a second thought after viewing Josephâ€™s solo exhibition.
Joseph transformed used motor car tyres into comfortable chairs ideal for any garden or an outdoor sitting arrangement.
The several metal sculptures he made are entirely made from found materials.
Besides his creativity in sculptures, the subjects are equally interesting. The intricate detail in some of his works is beyond imagination.
In one piece where he highlights the importance of family planning, Joseph builds a mother figure.
The mother is seen carrying a child on her back and another on her shoulders. The third child is holding her hands.
And looking at the bulged stomach, this woman is pregnant.
A careful look shows a fetus in her womb. It is one detail that I thought was too much for an ordinary eye like mine.
But that is how Joseph pays detail to his work.
BIOGRAPHY:
Joseph Shakulipa, is a self -taught sculptor. He was twice nominated for the Zambia Ngoma Awards in the category of â€˜Akwila Simpasaâ€™ recognising artistes in 2005 and 2010.
Joseph works mainly with wood, metal and stone. He has two solo exhibitions on record and has participated in several group exhibitions at home and abroad.
artyak@rocketmail.com