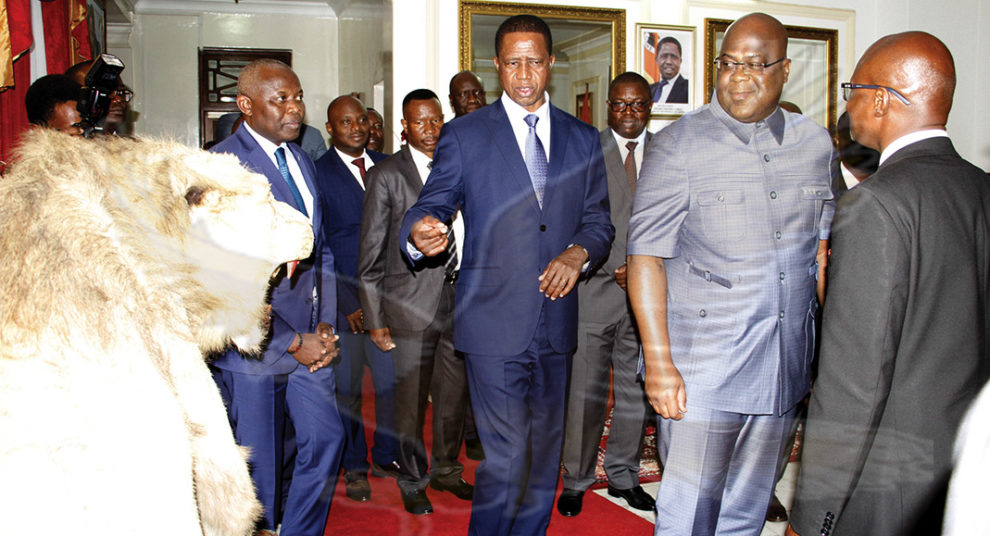 THAT Democratic Republic of Congo (DRC) President Felix Tshisekedi has assured the Zambian government of his support in establishing four hydro-power stations on Luapula River is indeed heart-warming and confirmation of good neighbourliness.
Mr Tshisekedi’s declaration is most welcome as it entails continuity in terms of collaboration between the two countries in areas of mutual interest.
It is a known fact that African countries, including Zambia and the DRC, have been facing power constraints.
In the region, for instance, nearly all countries are faced with massive power outages.
This adversely affects productivity because energy is the main driver of the economy.
Needless to say, as long as the continent continues to experience power deficits, its vision of industralisation and attaining development will remain an illusion.
Given that power deficit is affecting the whole continent, the need for countries to put efforts together in finding lasting solutions cannot be overemphasised.
It is, therefore, inspiring to hear the DRC President pledging his full support towards Zambia’s plans to establish four hydro-power stations on Luapula River, which forms part of the border between the two countries.
“We shall support you 100 percent in ensuring that the project is a success,” Mr Tshisekedi said during the tour of the Luapula Exposition stand at the on-going Zambia International Trade Fair.
The fact that the two countries share Luapula River, which is a key resource in hydro-power generation, working together will ensure successful implementation of the project and boost power generation in the region.
This is not only good for the two countries but the continent as a whole.
Accelerating the development of hydro-power sites is no doubt critical to enhancing security of power supply, promoting electricity trade and stimulating economic growth for the region and entire continent.
It is commendable that the Zambian government is taking a lead in initiating development of hydro-power sites to increase its electricity generation capacity.
Luapula River, which is in the northern part of Zambia, provides better opportunities for power generation due to the favourable rain patterns in the area.
The four hydro-power stations to be constructed at US$3 billion are expected to be generating 1,400 megawatts which will be fed into the main grid.
It is good that feasibility studies for the project have already been completed and potential funders identified.
As rightly submitted by Luapula Province Minister Nixon Chilangwa, there is now need to establish a special purpose taskforce representative of the two countries to ensure that the project is implemented, and successfully so, since the waters of Luapula River are shared.
When implemented, the project will definitely go a long way in reducing the current power deficit in the country and provide an opportunity to export the excess.
Currently, water levels at Kariba Dam, the main source of hydro-power, are very low, forcing Zesco – the power utility company – to ration the commodity for four hours every day.
According to Zesco, the number of load shedding hours is likely to increase as the water levels dwindle further.
In neighbouring Zimbabwe, load shedding lasts for as long as 19 hours.
Finding solutions to the power deficit at country and continental levels is not only a necessity but a matter of urgency.
Countries need to move quickly and explore opportunities for power generation.
There is also evident need to invest in alternative sources of energy such as solar.
This is because hydro-power generation has become a gamble due to climate change, which is affecting rainfall patterns.