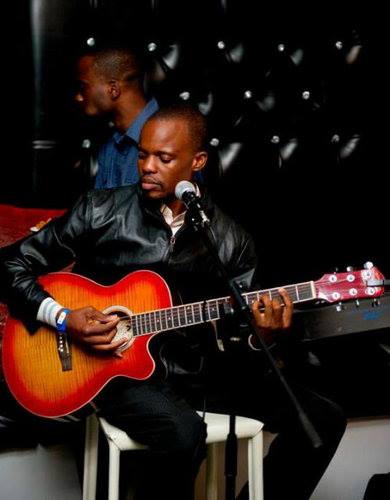 NKOLE NKOLE, Lusaka
AFROJAZZ artist, James Sakala pulled out all the stops last weekend when he delivered his first headlining show at The Misty Jazz Club in Lusaka.
James won the hearts of all who turned up for the show that was themed, â€œAfrica Night,â€ in celebration of this yearâ€™s Africa Freedom Day.
Borrowing songs from renowned African artists such as Zimbabweâ€™s Oliver Mtukudzi and the legendary PK Chishala, the singer was impeccable in his delivery.
For his first set he got approving nods and generous cheers following his rendition of PK Chishalaâ€™s Nali no Mumandi that was strikingly crisp.
Backed throughout the night by the Elect Band, James did not lose any of his rhythm when he transitioned into his second set that comprised songs taken off his yet to be released debut album, Insale.
He showed off his vocal range during his performance of the single, Listen to Me that features Zimbabwean, Jeromeo JJ, from the Big Brother Africa (BBA) season nine edition.
The two singers serenaded the evening with their sweet sounding melody sang in praise of a woman.
He was mesmeric during his performance of the love songs, Chikondi and Namfumu and sentimental in his tribute to a friend he termed his â€œbrother from another motherâ€ who sheltered him as he started out in his music career.
In showing his appreciation for the once popular music genre, Zamrock, James also sang Galamukani, a song he plans to include on his debut album.
James strummed on his semi classic guitar for most of the night and on a couple of occasions jumped off the stage to be closer to the audience while still strumming his guitar.
Now and then, he directly engaged his audience and explained the inspiration behind his different songs.
He later joked that he was Bemba in explaining his preference for using the language in much of his songs.
As his show drew to a close, James let loose and wound his waist in front of a highly amused audience.
Though James is still relatively new on the local music scene, he was selected as a supporting act during last yearâ€™s Stanbic Misty Jazz Festival.

Toughen up for jail
Daniel Baron to come for Game Rangers