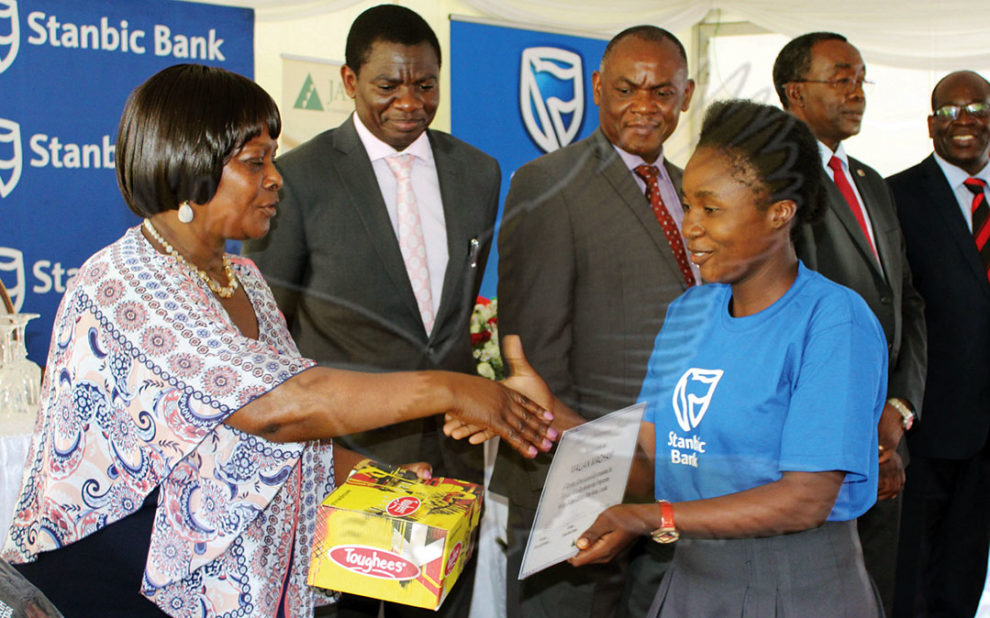 PRISCILLA MWILA, Lusaka
A NIGHT before travelling to State House in Lusaka to be part of the First Lady for a Day’ mentorship programme, Marian Machayi had a dream.“In the night before we travelled, I dreamt that I was late and the bus left me, I cried terribly. I woke up during the night and could not sleep properly after that,” Marian, 17, says. “All I did was doze off for a few minutes but stayed awake most of the night.”
Marian had never been to Lusaka before and State House was just a distant image for her. But all this was about to change after being selected to be part of the 2018 First Lady for a Day’ mentorship programme organised by Junior Achievement (JA) Zambia and Forum for African Women Educationalists of Zambia (FAWEZA) with support from Stanbic Bank.
Marian, a Grade 11 pupil at Kimiteto Secondary School in Solwezi, North-Western Province, had always wanted to travel to Lusaka. However, she did not want to travel to Lusaka to just be a house help, like most of the girls in her village who have moved to the capital city.
The last-born in a family of three, Marian was very young when her mother, Beatrice Machayi died. This led to the separation of the family as her father, Jonathan Machayi, was not able to adequately cater for their needs.
“I live in Solwezi with mum’s younger sister, my sister is with grandmother in Southern Province and my younger brother is the only one who remained with dad in Western Province,” she says.
“My mother was very hard working. She used to help a lot with providing what we needed at home. But all this changed when she died, I don’t know what happened to my father.”
Marian’s school decided to motivate pupils who were performing very well academically by having them be part of the 2018 First Lady for a Day’ mentorship programme.
Although Marian wanted to be picked, she was not overly confident of her chances as she thought there were other pupils who were performing better than her.
To her surprise, her name was called out during the school assembly among those to travel to Lusaka for the mentorship programme.
“I was surprised to be one of the six who were selected from my province to be part of the JA programme. My friend celebrated while I kept on crying because all I could think of was my dream of coming to Lusaka coming true,” she says.
“I thought of the privilege of not only coming to Lusaka but also being part of the pupils coming to State House, where the President and his family live.”
The night before the team set off for Lusaka, Marian fantasised on how the trip would be. Her mind was on State House, which she had only seen on television.
Before she knew it, they were in Lusaka.
Marian, who travelled by public bus, says she was amazed by the tall buildings in Lusaka which she only saw on television. She spent most of her journey to Lusaka looking outside the window of the bus admiring the various places in Lusaka.
She says the shopping malls are what really fascinated her.
“[I asked myself] How can you have so many shopping malls in Lusaka when some of us have none? This was indeed a dream come true for me. We didn’t have enough time to move around but I fed my eyes as much as I could,” she says.
While in Lusaka, the pupils were taken to Stanbic Bank training centre, where they learnt on the importance of choosing a career with a purpose. The pupils were also encouraged to choose careers which they would enjoy. In other words, passion is everything.
Marian describes the day at State House as a life, changing experience which she will never forget. But while she was limiting herself to coming to Lusaka for a mere visit, she found herself at State House under the hostess of Mrs Lungu, a privilege which most pupils in Lusaka have not even had.
She says the experienced, has changed her perception of life and now believes that anything is possible if one truly believes in themselves and God.
“This experience has boosted my self-esteem and helped me to believe in myself. Not only did I come to Lusaka, but went to State House, a rare privilege,” she says.
Marian is encouraging girls in schools to heed the First Lady’s advice to avoid early pregnancies and marriages by avoiding relationships while they are still young.
She is also encouraging her fellow pupils, especially girls, to use the opportunity in school to better their lives and become responsible citizens.
The First Lady for a Day’ mentorship programme is an annual event which brings together pupils from rural areas to spend time with the First Lady and be mentored on how to make well informed career choices. The pupils are drawn from the country’s 10 provinces.
About 58 pupils, who included the physically disabled, accompanied by their teachers attended this year’s mentorship programme.

Elizabeth, where art thou?
Kapande finds wife in shop