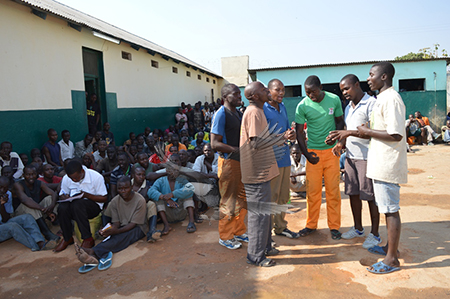 LINDA NYONDO and NOMSA NKANA, Lusaka
THE Zambia National Men’s Network for Gender and Development (ZNMNGD) has called for the establishment of separate correctional facilities for sexual offenders.
ZNMNGD national coordinator Nelson Banda says this is to place shame on the perpetrators because previous strategies have not yielded positive change in curbing Sexual Gender Based Violence (SGBV).
Mr Banda said in a statement that the recent cases of gang rape of girls, women, defenceless grandmothers, sodomising of boys and defilement of a three-day-old child among others are devastating and calls for the adoption of new methods in tackling the vice.
ZNMNGD aims at promoting gender equality, ending violence on women and girls and promoting the wellbeing of men and boys through advocacy and capacity building.
Mr Banda said separate correctional facilities for sexual offenders should be located in each provincial centre to operate alongside SGBV fast track courts.
“We feel the establishment of the separate sexual offenders correctional facilities will offer focused and centralised punitive and rehabilitation of rapists and defilers as they continue to serve their jail sentences,” he said.
“This will also offer a platform for the country to begin to fully understand the reasons why some men commit such atrocities as even some biological fathers have committed the offence against their own children.”
Mr Banda believes creation of separate facilities by Government will be one of the solutions to ending SGBV as it is an open secret that on a daily basis there are reports of defilement and rape cases reported in the media.
“We also suggest to Government that those convicted of other sexual related offences such as indecent assault should be rehabilitated in the SOCF [Sexual Offenders Correctional Facilities] and their particulars be recorded in a National Sexual Offence Data base so that authorities can monitor them when released from jail as these are potential rapists and defilers,” Mr Banda said.
And ZNMNGD has condemned a family of Chongwe district for shielding a man who defiled his eight-year-old niece in Makoka village.
Mr Banda said the man who allegedly defiled his sister’s daughter is being protected from prosecution by some family members who tipped him to run away when they learnt of a plan by police to arrest him.
ZNMNGD Chongwe Chapter had reported the case to Chongwe Police Station and facilitated the victim’s transport and medicals at Chongwe Hospital, which is 18 kilometres from where she was reportedly defiled.
“But the perpetrator has been evading arrest as he is believed to be hiding in Rufunsa district with the full knowledge of the mother of the defiled girl,” Mr Banda said.
“ZNMNGD is worried that one of the reasons why some perpetrators are not prosecuted is because some parents and guardians are shielding defilers and yet they know that having sex with a child is a criminal offence.”
Mr Banda said they are concerned that there a lot of cases of defilements, child marriages and Gender Based Violence being reported in Chongwe.