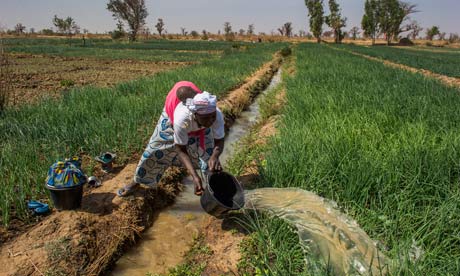 KELLY NJOMBO, Lusaka
IT IS a known fact, that the current and future development of the agriculture sector in Zambia cannot be achieved and sustained without the establishment of proper irrigation infrastructure among the farming communities.

With the current climatic challenges, it is important that irrigation is increasingly seen as a necessity to build resilience in smallholder rain-fed farming systems and to increase productivity to meet growing food demands in the country.

Zambia, like any other country has been hit by climate change, and this has resulted in weather variability which has adversely impacted on the rainy patterns.
The frequency of poor rainy seasons requires long term measures to develop a sustainable and a resilient agriculture sector in the long term to contribute to food security and job creation.
It is for this reason that, Government is committed to engage key stakeholders to develop initiatives that will help small-scale farmers adapt to changing climatic challenges affecting agricultural development.
Minister of Agriculture Dora Siliya feels the country needs to invest in water resource management systems to boost irrigation services in the country.
During a meeting with an Italian Delegation led by Italian Ambassador to Zambia Fillipo Scammacca recently, Ms Siliya said there is need to invest in modern irrigation systems to boost crop productivity.
“There is need to improve water resource management to boost irrigation systems and increase production in the country.
“Irrigation needs to be buttressed by technological innovation and institutional changes to encourage a more equitable distribution of resources and to mitigate potential water challenges in the wake of climate change,” she says.
It is envisaged that long term strategic thinking for farming in Zambia should focus on putting in place irrigation systems that are accessible to the smallholder farmers to boost productivity.
To improve irrigation systems in the country, the World Bank has out of the US$115 million investment, injected over US$60 million to support agricultural development in Zambia.
According to the latest World Bank country project profile, a total of US$60.47 million has been disbursed out of the US$115 million committed by the bank under the irrigation development and support project.
The US$201 million irrigation development and support project, which is also being supported by Government and other donors is aimed at reaching 14,000 smallholder farmers through training in irrigation and will provide access to irrigated land to about 1,800 families.
The bank believes the project will increase the ‘value for money’ of government-financed investment, leveraging public funds with private investment in which smallholder farmers will participate and benefit.
“The World Bank is supporting Zambia to create mutually beneficial economic relationships between the larger and smaller producers. The large producers may bring capital and expertise while smallholders may provide additional supply of products in demand,” the report says.
The project, which is expected to be concluded in December, has also resulted in the establishment of three irrigation schemes; namely the Mwomboshi Dam and irrigation scheme in Chisamba, Lusitu Irrigation Scheme in Southern Province and the Mukakashi Irrigation Scheme on the Copperbelt.
Construction of the Mwomboshi Dam and irrigation scheme in Chisamba has since advanced.
It is expected that the expanded irrigation coverage will increase agriculture productivity.
On the other hand, concerted effort is necessary in improving agricultural productivity through irrigation and investing in agribusinesses in reducing poverty.
However, despite irrigation being an important aspect in increasing yields among farmers, it is unfortunate that majority of small-scale farmers are unable to practice irrigation farming, due to high prices of irrigation machinery.
To this effect, the National Union for Small-scale Farmers Association of Zambia (NUSFAZ) suggests the need for financial institutions to create products that will enable small-scale farmers’ access finance to venture into irrigation farming.
Union president Frank Kayula is saddened that most small-scale farmers are unable to venture into irrigation farming due to lack of financial support.
In an interview, Dr Kayula notes that most products being offered by financial institutions are suitable for commercial farmers, but are unaffordable for most small-scale farmers.
Despite small-scale farmers been the major food producers in the country, they still remain vulnerable to climate-related shocks due to the country’s reliance on rain-fed agricultural production systems.
“With the current climatic challenges, farmers need other sources of water to continue growing crops and stop depending on rain.
“We are calling on commercial institutions to support the growth of the agriculture sector by developing products that will be suitable for small-scale farmers to enable them access finance and invest in irrigation services,” Dr Kayula observed.
It is evident that small-scale farmers’ access to irrigation services, will contribute to the promotion of high-value cash crops through diversification and contribute to food security.
These calls for concerted efforts should be developed to establish and develop irrigation infrastructure systems to enable small-scale farmers’ to practice irrigation farming.
Furthermore, Zambia needs to come up with viable solutions to enable small-scale farmers to venture into irrigation farming to boost productivity and food security in the country.
According to the Policy Monitoring and Research Centre (PMRC)’s expert opinion on Zambia’s policy guiding documents titled ‘Is It Time for Zambia to invest in Agriculture’?, over 90 percent of Zambia’s smallholder farmers largely depend on rain, as majority do not have access to modern irrigation systems.
With the effects of climate change already being felt by people and the farmers, prudent investment in source management in irrigation infrastructure is critical.
“It is time for Zambia to consider investing in irrigation to ensure sustainability and improve productivity in the agriculture sector,” PMRC says.
Obviously, long-term strategic thinking for farming in Zambia should focus on putting in place irrigation systems that will be accessible to the small-scale farmers to boost productivity and food security.
It is also important to support smallholder irrigation through finance and technical assistance to significantly improve productivity and incomes among farmers.