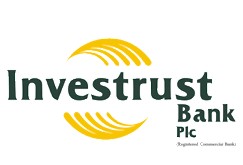 KALONDE NYATI, Lusaka
INVESTRUST Bank is expected to recruit 2,000 agents under the agency banking model by December this year to reach the unbanked communities across the country.
Bank spokesperson Ackim Mwale said the over K1.8 million programme is expected to respond to the need for broader financial inclusion in the country.
â€œInvestrust has embarked on a robust programme to provide financial services to communities that lack banking facilities throughout the country by setting a target of recruiting 2,000 agents,â€ he said in a statement issued recently.
The bank, which launched the agency banking model last year has so far recruited 550 agents countrywide and since acquired 3,000 operational gadgets that will be distributed to traders that meet the requirements.
â€œAgents will use the acquired operational gadgets, which are basically android mobile phones, to perform transactions from their business premises. The specially designed and manufactured agent mobile phones have an inbuilt InvestMobile App to facilitate service provision to our customers under the financial inclusion agenda,â€ he said.
The agents will provide basic banking services such as cash deposits and withdrawals, account opening, bill payments and cash transfers on behalf of the bank.
Agency banking will also reduce the long distance customers have to cover to access various banking services.