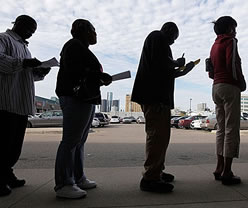 GODFREY CHITALU
I was recently accosted by a young graduate, irked by â€œthe self-destruct publicist stunts employed by some corporate entities in their latest staff recruitment drivesâ€.

Waving a Daily Mail newspaper in exasperation, he bemoaned the new trend that makes a mockery of people; inviting thousands of job seekers for aptitude tests when ultimately only a handful are employed. â€œWhat morality is there for reputable organisations like Zambia Revenue Authority to whet the appetite of loafers by inviting them to mass psychometric tests when they reasonably know their employment limitations?â€ he asked.
I took time to scrutinise the 5th October 2014 newspaper; ZRA indeed had invited 2,698, likely youthful Zambians to compete for two positions of examining officer and assistant customs officer. It was not made known how many openings existed for each position.
Even using my wildest exaggerations, I doubted if the vacancies at ZRA exceeded 50, meaning that on average that was the number of participants competing for one position. Crude as it may sound, it is clear that ZRA does not have the heart for our suffering people.
Candidates were required to come with identity cards, attend on specified dates and to meet their transport costs to Lusakaâ€™s Mulungushi International Conference Centre.
The latter made me feel dizzy because half the applicants could have been coming from other provinces. K300 is the average cost of such a return trip, while twice as much would barely cater for comfortable accommodation. In this closed fist society, asking our citizens to collectively burn K1,300,000 is not only immoral but unjustifiable.
ZRA, whose mission is â€œTo optimise and sustain revenue collection through integrated, efficient, cost-effective and transparent systems, professionally managed to meet the expectations of all stakeholders,â€ is certainly not meeting my expectations on this score.
They need to resolve such seemingly minute issues to give them the impetus to tackle crafty mining conglomerates.
What is worrying is that ZRA is just doing copy and paste from National Pensions Scheme Authority (NAPSA), who advertised some positions in mid-2013. It was looking for, among others, statisticians, engineers, customer services, quality control, compliance, remittance and claims officers.
Their interviewees from across the length and breadth of our country filled Zambiaâ€™s biggest conference centre between September 5 and 7 last year. By October 18, preferred candidates had been contacted and employed.
My parallel tracking shows that not more than 20 from the thousands that sat for psychometric tests were employed. Is this a humane way of dealing with our unemployed?
The transparency exhibited and huge sums spent on full page advertisements in splashing thousands of names for what I term ghost and dead end interviews is diluted in the lack of decency; why interview 1,000 for 10 jobs? Proponents of this system, which hinge on rigorous psychometric tests, should strive for fairness.
Yes, such tests allow for assessment of skills, knowledge, abilities, attitudes,Â logic, personalityÂ traits, andÂ the like, but it has nothing to do with over-inviting aspirants.
In the western world, where this system is widely used, an organisation can be sued for taking citizens for granted; inviting someone for an interview where it is reasonably believed there are no chances for employment.
It never ceases to amaze me how we weave a system that drives a wedge between the unemployed youth and government on one side and corporate big wigs and their companies on the other. Someone must put a stop to this employment cul-de-sac.
The author is a social and political commentator.