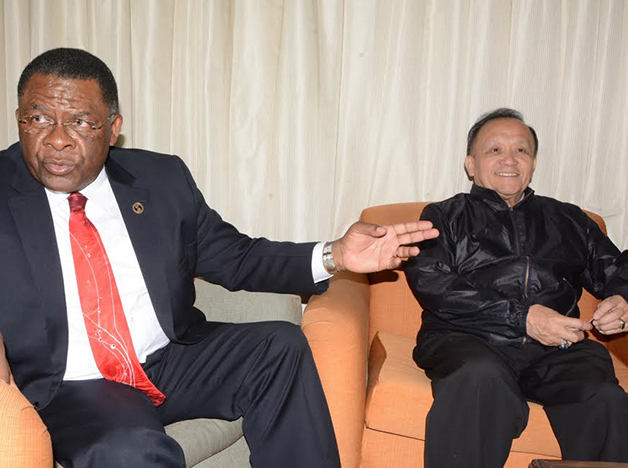 LINDA NYONDO, Lusaka
VICE-PRESIDENT Inonge Wina has asked Rotary Club International to help Zambia eradicate polio and malaria.
Speaking at her office when visiting Rotary Club international president paid a courtesy call on her, Mrs Wina said that polio is an invisible disease that has continued claiming lives in Zambia.
â€œThere is need for the Rotary Club International to put more effort in helping Zambia eradicate polio and malaria,â€™â€™ he said.
Mrs Wina commended Rotary Club International for championing service delivery and various support programmes in Zambia.
She asked the club to train more girls in science and mathematics to help drive the Zambian economy.
And Rotary Club International president Gary Huany said the rotary club and the World Health Organisation have partnered to make African countries like Zambia a polio-free zone.
Mr Huany said Rotarians in Zambia will in the next few months partner with the Ministry of Health work out modalities aimed at fighting polio.
This is Mr Huanyâ€™s second visit to Zambia. He is expected to go to Kenya and Mongolia before retaining to China.
And CAROLINE KALOMBE in Lusaka reports that the Vice-President says there is need for concerted efforts from all stakeholders to curb teenage pregnancies.
According to a statement issued in Lusaka on Thursday by her senior private secretary Sheila Siwela, the Vice-President says there must be a multi-sectorial response that will provide policy direction to address the problem.
She said this when United Nations Population Agency country representative Mary Otieno called on her Thursday.
â€œI believe that many girls are forced into early marriages because they fall pregnant first,â€ Mrs Wina said.
Mrs Wina noted that some girls die because of complications associated with pregnancies and that rural women suffer the worst brunt.
She said there is need to invest in reproductive health education for young women, especially in rural areas.
And Ms Otieno said her organisation will remain committed to assisting the Zambian government in addressing reproductive health and other related issues such as teenage pregnancies.