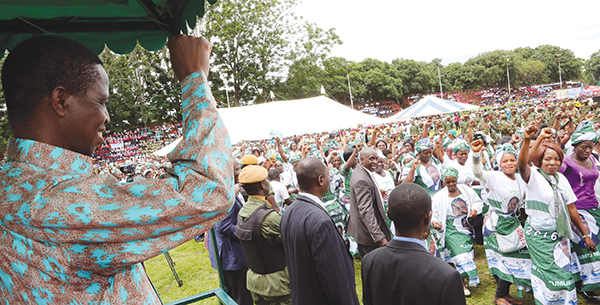 NANCY SIAME, Lusaka
PRESIDENT Lungu has ordered that his directive that 50 percent of all land allocations be reserved for women should be fully implemented.
And President Lungu has directed Minister of Finance Felix Mutati to allocate adequate money to the Ministry of Gender to enable it implement the vision in the Patriotic Frontâ€™s (PF) manifesto on gender and women empowerment.
The President yesterday directed Minister of Lands Jean Kapata and her Local Government counterpart Vincent Mwale and urged traditional leaders to ensure the directive is implemented as a way of empowering women and reducing poverty.
Speaking when he officiated at the commemoration of the International Womenâ€™s Day at Lusaka Show Grounds, President Lungu said women should be given the opportunity to own land without being subjected to harsh conditions.
â€œThe land that women will own should be in their names as absolute owners,â€ he said amid applause.
President Lungu encouraged women to use the land they acquire to engage in agriculture and participate in value addition to help improve their lives.
He said a number of cooperatives have been established with tractors, tillers and other agricultural equipment distributed in chiefdoms around the country to benefit women.
The President said to transform agriculture into a real business venture for small-scale farmers, mechanisation of the sector is inevitable.
â€œMechanisation of agriculture will result in high yields and profit for the small-scale farmers to ensure good nutrition and food security at community and national level,â€ President Lungu said.
He said women constitute more than 50 percent of the population and their contribution to national development could be ignored, but regretted the high number of gender-based violence (GBV) cases in the country.
â€œIt has become a common feature that our women, who are life-givers, are killing their partners in gruesome circumstances,â€ President Lungu said.
President Lungu said he is also saddened by increased cases of murder of women occasioned by men.
Meanwhile, President Lungu has directed Mr Mutati to allocate adequate money to the Ministry of Gender to enable it implement the PFâ€™s manifesto on gender and women empowerment.
He said he has received reports that the Ministry of Gender has not been treated equally with other ministries because it was thought to be less important.
Minister of Gender Victoria Kalima said her ministry is committed to achieving the 50/50 representation by 2030 to ensure women and girls are included in economic development.
Meanwhile, United Nations (UN) resident coordinator Janet Rogan has said GBV, child marriages, early pregnancies and defilement are at crisis levels in the country.
Ms Rogan said this shows a fundamental imbalance in the power levels in society between women and men.
â€œPolice statistics show that in 2002, there were 870 cases of defilement reported and last year they rose to 2,000,â€ she said.
Earlier, Non-Governmental Organisations Coordinating Council (NGOCC) chairperson Sera Longwe urged Government to expedite the operationalisation of the Gender Equity and Equality Act and put in place a gender commission to address inequality and narrow the gender gaps at all levels.
This yearâ€™s theme was â€˜Promoting inclusiveness in economic PpSustainable Developmentâ€™.