JACK ZIMBA, Mumbwa
WE HAD only driven a few hundred metres inside the Mumbwa Game Management Area (GMA), branching off from the M9, the road that leads to Mongu, when we found the first evidence of the destruction – a large charcoal kiln.
When our vehicle came to a stop, a man and two young boys making the kiln took to their heels, disappearing behind the tall trees. 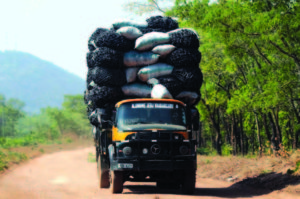 Kennedy, one of the game rangers escorting us, counted about 50 fresh stumps of the mutondo tree around the kiln. He wagged his head, more in frustration than in disbelief.
The game ranger has now become accustomed to such scenes in this protected swath of forest, which also acts as a buffer zone for the country’s largest wildlife sanctuary – the Kafue National Park, which occupies 22,400km/sq.
The Mumbwa GMA is made up of two protected forests known as Mumbwa East and Mumbwa West, sitting on 3,760km/sq of land.
About 200m from the charcoal kiln, a man was walking behind a pair of oxen, ploughing a newly opened field.
And driving deeper into the forest, we made a grim discovery – large-scale charcoal production. The largest kiln we found measured three metres wide, 40 metres long and about two metres high.
On the edge of a clearing, Felix Mumba was standing by his 60 bags of charcoal. He was waiting for a truck to deliver the bags to Lusaka.
He makes about K2,500 profit on each trip, delivering between 150 and 180 bags of CLICK TO READ MORE