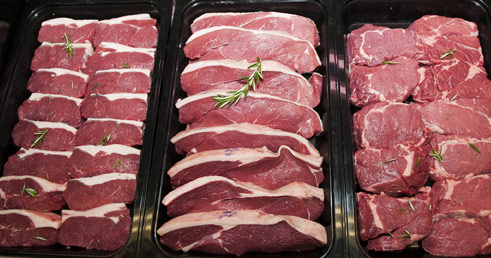 BENEDICT TEMBO, Lusaka
GOVERNMENT is investigating the influx of imported beef, which has flooded the market and frozen out local farmers, Ministry of Agriculture and Livestock permanent secretary David Shamulenge has said.
Dr Shamulenge said Government is in the process of compiling statistics to establish whether the importation of beef and poultry products has escalated.
Dr Shamulenge said there has been a trend of beef and poultry products flooding the Zambian market towards Christmas but this time around, the influx seems to have more than doubled and is affecting local farmers.
He said in Lusaka yesterday that Government has been meeting stakeholders such as farmers and meat-processing companies to understand the extent of the impact caused by the flooding of imported beef and poultry products on the local market.
Dr Shamulenge said the investigation Government is conducting is intended to establish to what extent farmers who sell raw materials to the meat-processing companies have been affected.
He said Government also wants to establish the origin of the carcasses being brought into the country.
â€œWe are worried about the diseases that could come in [with the meat],â€ Dr Shamulenge said.
Chief Mukobela of the Ila people in Namwala said there is genuine concern among his people who keep animals because imported beef has shrunk the market for their cattle.
â€œSome meat is believed to be coming from Argentina and Brazil. It is heavily subsidised, it is very, very cheap and our meat cannot compete favourably,â€ Chief Mukobela said.
He said massive importation of beef is fueling poverty in Zambia.
â€œIf our beef is challenged, it does not only increase poverty but exposes the country to genetically modified organisms,â€ he said.
He said poverty and its offshoots such as illiteracy and malnutrition will escalate because farmers will have no money to spend on education and food.
His sentiments were echoed by a Chibombo farmer, Ricky Mushokota, who bemoaned the lack of business for their cattle.
He said about 30 farmers in Chibombo are stuck with their cattle because meat-processing companies are facing stiff challenge from imported beef.