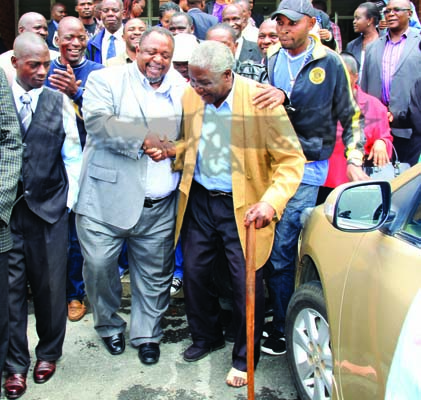 SPEAK OUT ON VIOLENCE with DORIS KASOTE
I GREW up in a home flooded with the love of a father. I know the positive side of having a father around. My dearest father Alfred Mwape Kasote even had an opportunity to extend his love to his grandchildren.
Unfortunately, he passed on two years ago. Though he died at a time I was already independent, the pain of not having him in my life is remains indescribable. Nevertheless, I thank God for the privilege of having had him around and the time he spent with us.
At this time, my fond thoughts drift to the love and support my dad extended to me and my sisters when I hear some women complain of how some men shun the responsibility of taking care of their own brood. They care less in as far as loving and adoring their offspring is concerned.
Some men simply father their children and disappear from the face of the earth, not spending a penny on the well-being of the child.
Surely, how does such a man live with himself? Anyhow, what goes around comes around as such men when they are old and grey end up going back to the same children they desert to seek support.
Children are a gift from God and I feel it is the responsibility of every parent to play a role in the life of their offspring. Afterall, that child is a result of his â€˜labourâ€™ andÂ  that is what defines one to be man enough.
Yes, it takes a lot to raise a child but a parent who means well for their child will do what it takes to ensure that the life of their child is made comfortable in all possible ways. The mere fact that one brings a human being into this world, should be reason enough to ensure that they play their role as a parent.
I have been prompted to single out fathers following stories I hear and see for myself about how irresponsible some of them can be.
I received mail from one of my readers who poured her heart out on how irresponsible the father of her child is. This is when I thought of putting pen to paper, hopefully when some men out there read what torture they put their children through, they will have a change of mind, in fact reform of their unfatherly ways.
Obviously, the absence of a father – or a father figure – in a childâ€™s life affects the well-being of a child. Not having a father figure yet a child knows that somewhere on this face of the earth; his father is alive and kicking, takes away the ability of children to relate to the picture of an ideal family.
Children of absentee fathers have to deal with feelings of abandonment and frustration from the lack of involvement the father has in their lives.
Even if at some point, a child realises that his fatherâ€™s absence is not because of him, the child blames himself.
Absentee fathers bring out feelings of resentment in children, so having a male to look up to makes some children comfortable and creates a sense of confidence and responsibility.
A fatherâ€™s love is just as important as a motherâ€™s love.
Many a time, we read about a man having been taken to court for child maintenance but what comes out of it is that the court will order the father to give a woman maybe K300 to K500 towards the childâ€™s welfare. But surely what is K300 or K500 compared to what it takes to bring up a child.
Even after such orders, some men still defy the court order. These men never stop to wonder whether their child is going to school, takes a bath or even at least has a hot meal.
Here is a correspondence from a woman who has complained about the father of one of her children being absent from their life. She writes:
Greetings, I am an avid reader of your column and I really would like you to address the topic on absentee fathers. I am a single mother of two children with a job. The problem I face is the father of my second child has only seen our child once when she was two months, she is 10 years old now. Every time she asks me where her father is, I am filled with so much pain because I know where he is but I am too proud to confront him. Every time I read about child maintenance cases, I am so disgusted because the amount women are given is not enough to sustain any normal person. What can K150 do for a child? In countries like America itâ€™s an offence not to support ones child, sometimes it can lead to arrest! So what is so special about Zambian men who canâ€™t take responsibility? Please kindly address the issue. God bless you.
I beg men out there who have shunned their children to take up their responsibility.
Until next week, letâ€™s keep in touch.
dkasote@daily-mail.co.zm