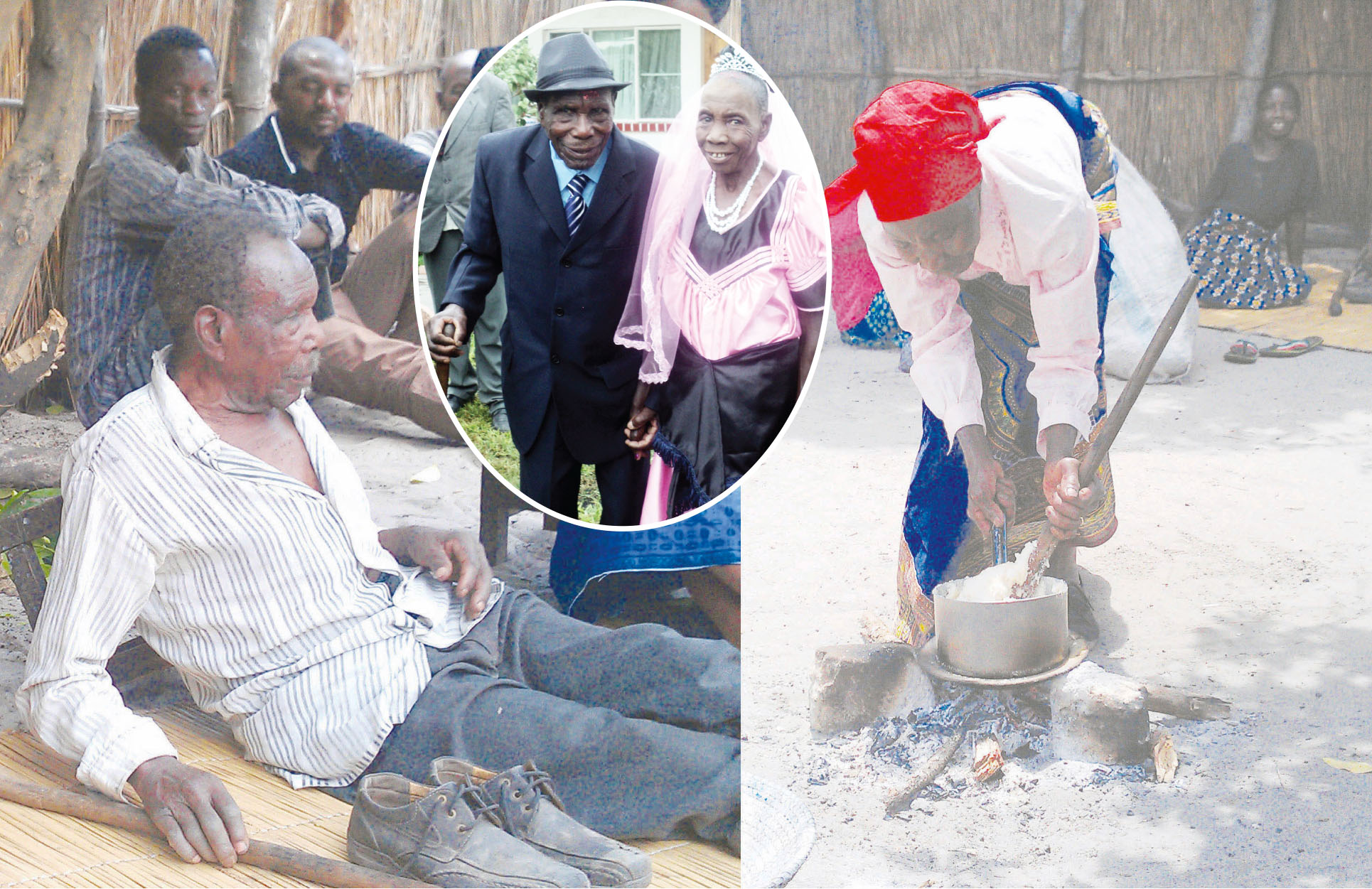 HOW WE MET with MWAPE MWENYA
IT HAS been a year since 99-year-old Mushiba Imonda and his 83-year-old wife Sitali Kalaluka made sensational headlines in all media institutions about their remarriage after 39 years of being on separation.
The wedding nicknamed the Alpha and the Omega (The beginning and the end) because according to the husband, he was sure it was the first and last time he was reuniting with his wifeÂ  till death do them apart.
The couple separated for more than three decades ago. At the age, 99, Mr Imonda is still bold to walk although with the aid of a walking stick, his wife is also energetic enough to perform duties such as gardening, fetching water and cooking.
Their wedding was a crowd pulling event which attracted people from all walks of life with a number of them making pledges ranging from monetary form to material possessions.
The couple who together make 180 years beat the record of being the oldest couple to have ever reported of re-uniting in Zambia.
â€œMarriage is bliss, the one year I have lived with my wife has been rosy, I am enjoying every bit of it,â€ Mr Imonda told this reporter with a glowing face.
He was speaking at the comfort of his house in Moole village in chief Sikwa`s area in Mongu district where he is a headman.
Throughout the interview Mr Imonda was laughing hysterically and teasing this reporter of how he wished she knew how he was feeling to have a wife after a long time of loneliness.
â€œI used to wash clothes on my own. I also used to cook and clean my house. This is no longer the case,Â  my wife has taken up all those responsibilities, I just relax in my camp chair or my reed mat waiting for herÂ  to perform house chores and prepare my food. I am a happy man,â€ he said.
Mr Imonda who turned 99 in July this year, praised Government and well-wishers who supported him and his wife during their wedding which took place on November 30, 2013 at Mongu Trades Training Institute.
The two were married in 1974; they later separated in the same year due to alleged irreconcilable issues.
The lovebirds did not have any children in their marriage, though Mr Imonda went and married another woman after the separation and has a child with his second wife, Mrs Imonda never married as she claims her love for husband was still lingering on her mind hence she turned down all marriage proposals from other men.
Fortunate enough, as Mr Imonda stated, what God has put together no man can put apart despite time and distance, the two were reunited by Mr Imondaâ€™s niece, Dorothy Kaumba who happens to be the former Mongu Mayor.
â€œThe man used to complain that he needed to reunite with his former wife after his second wife died, it so happened that I knew someone who comes from the village were his first wife used to live so that`s howÂ  Mr Imonda started writing letters to his first wife and made the marriage proposal,â€ Ms Kaumba said.
Ms Kaumba said, her uncle was very happy when she accepted his proposal because he was a lonely man with no one to cook for him except for his neighbours as his daughter was also not always available.
Meanwhile, his wife Sitali Kalaluka could not hide her joy on how happy she has been in her marriage.
â€œI feel like a young woman who has just been married for the first time, my husband is a loving and caring man. We live a happy life than before because we have grown and there is no need for us to be differing, we understand each other better now,â€ Ms Kalaluka said.
She wakes up as early as five hours in the morning to go to the nearby river to draw water for use at home, she makes sure by the time the husband is waking up at least most house chores are done and prepares water for bathing before treating him to a breakfast meal.
It is so involving but I am enjoying it because I want to make sure that we live in a clean environment all the time.
Ms Imonda, however appealed for financial assistance for her household; she stated that life has not been easy without money to buy food and other basic needs.
She said as age is catching up with her, it would be difficult for her to engage in any income-generating activity, especially that her husband also has a problem with his legs.
Mr and Mrs Imonda who have been happily married for a year now are praying that God continues adding days to their lives so they can continue enjoying their union. They live in a spacious one-room grass thatched house which is about 45 kilometres from Mongu town in Ikabako village.