SAVENDA is involved in mine supply services to major mining companies.

KELVIN KACHINGWE, Lusaka
IN 1997, Dr Miles Munroe announced that he would be going to Johannesburg, South Africa, for a business seminar. Having been a follower of Dr Munroe for years, Clever Mpoha decided to be part of the delegates for the conference.
“I left for South Africa at a time I was working for Barloworld together with my wife,” Mpoha, the managing director for Savenda Group of Companies, writes in his autobiography. 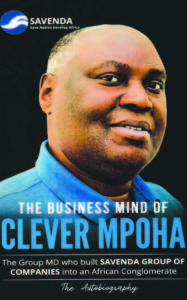 ZACOSA should help those aspiring to study in China holistically