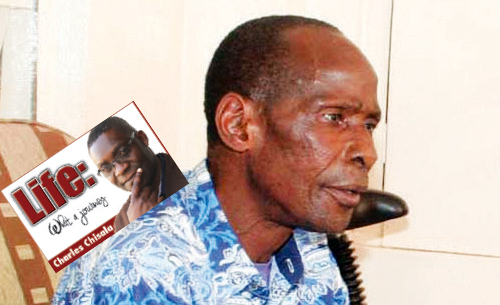 Life: What a journey – CHARLES CHISALA
IT IS not often that a paramount chief is accused of theft. Anyone who dares make such a grave allegation must have rock-solid

evidence to prove it.
So, it is with trembling hands that I am writing this serious allegation against the Nkhosi, Paramount Chief Mpezeni, the king of the Ngoni people of Eastern Province.
And who wouldn’t be spooked by those crazy, stomping and prancing Ngoni warriors of his in their Shaka Zulu era war regalia?
But truth be told, His Royal Highness Paramount Chief Mpezeni is guilty of stealing the show at this year’s Umutomboko traditional ceremony of the Lunda people who live in the Laupula Valley (Abena Luunda).
The evidence is there for all to see. All one needs is view the footage captured by the ZNBC TV cameraman who was perched atop the roof of one of the shelters during the ceremony.
I hope ZNBC TV has not deleted that footage, otherwise I will be in serious trouble.
President Lungu had already arrived and was sitting comfortably in the VIP lounge following the activities in the main arena.
Of course, his arrival had caused a stir. The multitude that had gathered to attend the annual spectacle, including delegates to the Luapula Expo and Investment Conference, roared into applause when he appeared.
“Abesu, abesu [our own, our own]!” shouted the locals as the tall, smiling Easterner strolled from the new museum on the north-eastern side of the arena to the VIP shelter.
It was one of the biggest Umutomboko ceremonies thanks to the expo, which had brought domestic and foreign visitors.
One cultural group after the other was called to the main arena to perform. Most of the songs were in praise of the current Mwata Kazembe XIX.
A local karate team also put up some lacklustre performance.
Then the noisy and energetic dance troupe from Lubumbashi, Democratic Republic of Congo, led by their member of parliament Albertina Bwalya, sauntered onto the stage escorted by a band of drummers, saxophonists and trumpeters.
The resplendently dressed Congolese, some of who spoke fluent Bemba, mesmerised the crowd with their elaborate moves.
The Mwata’s official cream-white American made International bus with the words ‘Mwinempanda, Government of Chishinga Colony’ written on both sides drove in at incredible speed despite appearing to be older than age itself and pulled up in front of the royal shelter.
Not even the members of the royal establishment could guess its age.
It looks as if it has just been stolen from some motor vehicle museum.
But don’t be deceived by its grotesque and ancient look for, with its incredibly powerful engine and large tyres, it can easily outrun a new Toyota Hiace bus.
Amid cheers Lunda chiefs numbering over a dozen poured out of the monster, dressed in the colourful red and blue Lunda royal colours.
Shortly after the bus had sped away hell broke loose. From nowhere a slow-moving convoy of posh vehicles snaked into the arena with a horde of bloody-thirsty assegai (short spear) wielding Ngoni warriors running and stomping in front.
Some of the warriors were running on both sides of the vehicle carrying the Nkhosi, Paramount Chief Mpezeni.
The chief, who was dressed in a grey designer suit, was standing through the sunroof and waving to the crowd with his black flywhisk.
Some of the unruly warriors strayed onto the main stage and started charging at the Congolese dancers with their deathly short-shafted spears raised above their heads, as if ready to strike.
The Congolese looked genuinely frightened and temporarily stopped dancing and playing music.
A Bemba man seated one row behind me told another man on his right, “That is indiscipline of the highest order. Why is he stealing the show?
“Can you tell your chief to behave or else we will order the Mwata’s royal police to arrest him and charge him with cultural theft?”
The man explained that the paramount chief was merely reciprocating what the Mwata had done during this year’s Nc’wala ceremony in Eastern Province, where his soldiers allegedly caused a scare by firing in the air with his muzzle loader guns.
“And you think those warriors will just sit by and watch their beloved king being harassed by those civilian police from your palace?” the Ngoni man answered.
“Your warriors have spears; our Lunda soldiers have guns.
“You even know what the outcome of a battle between them would be. The Portuguese didn’t sell the Mwata those things as toys,” the Bemba man boasted.
But the Ngoni man retorted, “That was then, mwana [my friend]. Where and when did your so-called Lunda soldiers train how to fight with guns?”
Senior Chief Mwata Kazembe’s palace is believed to be keeping an impressive arsenal of muzzle loader guns from the era of tribal wars.
Someone explained that while the Bembas used such weapons to subdue other tribes as they extended their kingdom and influence the Lundas of Luapula Valley used the guns for capturing slaves, whom they sold to the Portuguese and Arab slave traders.
“They should throw away those ancient things because they are a vestige and bitter reminder of slavery. It was not the Portuguese or the Arabs but your Lunda chiefs who captured the slaves,” the Ngoni man said.
The jibe drew a sharp reaction from the Bemba man.
“What are you trying to say? Is it our fault that we were stronger fighters than many other tribes and were able to use fire arms as early as that?” he demanded.
A third man, who seemed to be from a neutral tribe, interjected, “Can you two stop quarrelling now? The chief from the east is in fact making this year’s Umotomboko ceremony more interesting. Look at him!” he said pointing at the flywhisk-waving Mpezeni.
There was a truce between the two feuding tribal cousins.
Paramount Chief Mpezeni finally disembarked from his vehicle and took up his seat in the VIP shelter, and the proceedings continued as normal.
charles_chisala@yahoo.com