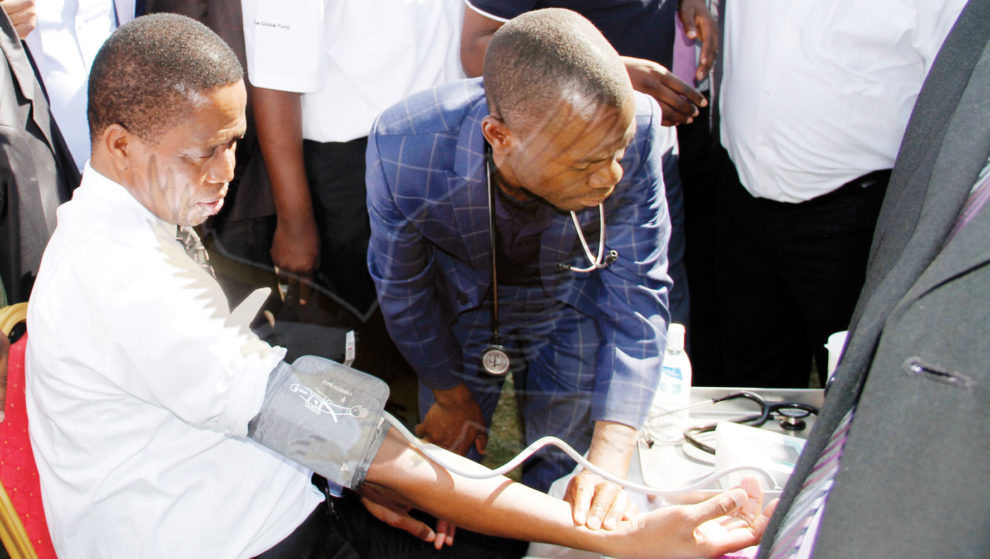 NANCY SIAME, Lusaka
PRESIDENT Lungu has declared that HIV testing is now mandatory for anyone who visits any public health facility for any ailment.

President Lungu said HIV testing will now be among other tests to be done on patients to ascertain their state of health in order to provide timely and appropriate remedies.
He said if one tests positive for HIV, counselling and treatment would be done immediately.
President Lungu said this yesterday in Lusaka when launching the 2017 HIV Testing, Counselling and Treatment (HTCT) Day.
“Protecting the life of those affected overrides the human rights argument about voluntary testing,” he said.
The President said that Cabinet debated the matter on Monday and made the decision to make HIV testing mandatory to help save lives.
“There is no need to wait for people to fall sick before they can start life-saving treatment,” President Lungu said.
HTCT Day, which will be commemorated annually on August 15, has replaced National Voluntary Counselling and Testing Day.
HTCT Day was held under the theme ‘Test and treat: towards ending AIDS’.
President Lungu is hopeful that with this policy, and other initiatives put in place, the country will eliminate HIV/AIDS by 2030.
He said the HIV/AIDS scourge is one of the biggest threats to the country’s development, hence the need to fight it.
President Lungu said since the first case of HIV was confirmed in the country in 1984, about one million Zambians have died mainly in the productive age-group, while 1.2 million are living with the virus, out of which 800,000 are on antiretroviral treatment.
President Lungu said it is important for people to know their status to enable them to take caution and protect their lives and those of their families.
He is concerned that most men are not willing to go for HIV testing for fear of the unknown.
He urged the Ministry of Health to come up with innovative ways of encouraging men to undergo HIV testing.
“If you do not want to go to the health facility for HIV testing, Government has adopted HIV self-testing kits which one can use to test themselves and share results with their doctor,” President Lungu said.
President Lungu said he is also saddened that there are still reports of people with HIV who are discriminated in communities and places of work.
He said Government will not condone discrimination of HIV patients in places of work and will henceforth support the Ministry of Labour in ensuring everyone in the place of work is treated equally.
“HIV should be treated like any other health problem such as malaria or high blood pressure,” he said.
UN resident coordinator Janet Rogan said communicable diseases can be killers if left undetected, but if discovered early can save lives.
Ms Rogan said the fight against HIV/AIDS should not be left to Government alone but that everyone must take responsibility, including individuals, by looking after themselves and knowing their status.
“Only 67 percent of the population know their HIV status, those who do not know risk theirs and their partners’ lives every time they become intimate,” she said.
She called for behavioural change among young people if the HIV scourge is to be fought.
Ms Rogan encouraged people not to be misled into stopping taking their medication by anyone, including their pastors, as there is no HIV cure.
United States (US) Charge d’Affaires Christopher Craft said the HTCT strategy is an important step in helping to attain an AIDS-free generation.
Mr Craft said the US government, through the President’s Emergency Plan for AIDS Relief, has since 2004 committed US$3 billion in the fight against HIV/AIDS.
Lusaka Province Minister Japhen Mwakalombe thanked President Lungu for his unwavering support to fight HIV/AIDS and encouraged everyone to go for HIV testing.
In Kitwe, MWILA NTAMBI reports that Kitwe mayor Christopher Kang’ombe said there is need for civic leaders to put more effort in ensuring new HIV cases in the district, and the province at large, are reduced.
Speaking in Kitwe yesterday during National HIV Counselling, Testing and Treatment Day at Buchi Community Hall, Mr Kangómbe said civic leaders must be in the forefront of mobilising people that need HIV counselling, testing and treatment services in the communities because that is what leadership entails.
He said the HIV prevalence rate, which stands at 12.3 percent in Kitwe district, and 14.2 percent at provincial level, has to be reduced further.
Mr Kangómbe said efforts by Government to take practical steps of linking HIV testing to the commencement of anti-retroviral treatment should be supported by all.
And speaking at the same function, Zambian Network of People Living with HIV (NZP) coordinator Forward Katakula appealed to Government to extend social cash transfer services to people living with HIV.