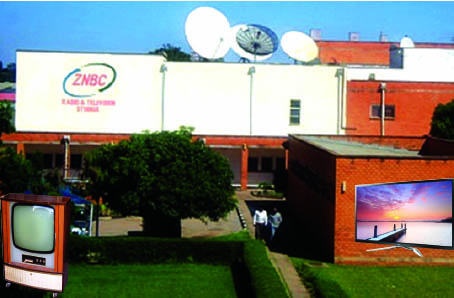 KELVIN KACHINGWE
Lusaka
THAT there is 24-hour television service in Zambia now is testimony to just how the broadcasting industry has grown over five decades.
The history of television in Zambia is different from that of radio, whose first experimental broadcasting station was set up in 1941 in Lusaka on Queen Mary Avenue (now Haile Selassie Avenue) near City Airport where Ndeke House stands today.
The first television station in the country that was set up in Kitwe in 1961 used to operate for two hours only, from 18:00 hours to 20:00 hours from Monday to Friday.
On Saturday and Sunday, it operated from 18:00 hours to 21:00 hours.
Owned by the Rhodesia Television Limited (RTL), a private company based in Salisbury (Harare), Southern Rhodesia (Zimbabwe), the station was set up to purely entertain the Europeans who were in large numbers on the Copperbelt working on the mines. All the programmes shown on the station were also foreign.
In his book, The History of Radio, Television Broadcasting In Zambia and the Producerâ€™s Manual, Mwansa Kapeya writes that at independence in 1964, the Rhodesia Television became Zambia Television Limited and the government nominated a member to sit on the board of the company.
In 1965, an experimental service was launched in Lusaka, operating from the Zambia Broadcasting Services (ZBS) premises on Independence Avenue.
However, the period of operation was the same as in Rhodesia Television and foreign programmes continued to be aired with a few local productions mostly studio-based such as discussions and musical programmes. It was only in 1970 that the period of transmission was increased, opening at 17:00 hours and closing at 21:00 hours on a daily basis.
Mr Kapeya, who spent the whole of his working career in the field of broadcasting and was to later serve as Minister of Information and Broadcasting Services, writes in his book that the integration of the television services into the Zambia Broadcasting Services in June 1967, had resulted in better co-ordination between two media of sound and television. This also resulted in the greater being of television as an agency of government information.
Otherwise, another major change for television occurred when colour transmission was launched in Zambia in 1977. Also, by 1982, television transmitting stations had been established in all major centres of the country. And at the advent of the corporation in 1988, the station came to be known as the Zambia Nation Broadcasting Corporation â€“ Television.
The station continued to open at 17:00 hours during weekdays and had no fixed closing time, but took place any time after 23:00 hours. On Saturday and Sunday, the station opened at 07:00 hours and closed at 24:00 hours.
The programmes, mainly from the United States of America and United Kingdom, ranged from information to entertainment, education, culture and religion. Daily news included the half-hour main news at 19:00 hours, news brief at 21:30 hours and news headlines at close down.
The seven local languages were introduced on television in October 1990, and were allocated an hour from 18:00 hours to 19:00 hours once a week from Sunday to Saturday.
The local language programmes on television lasted for one year until 1996 when five-minute news per language was re-introduced on television on a daily basis running from 16: 25 hours during weekdays only.
The coffers of ZNBC received a boost when Parliament passed the law in December 2002 which allowed it to collect a TV licence fee. The collection of the K3 rebased on each television set was implemented in September 2003.
For a long time, ZNBC dominated television services in the country until 1998 when the first private television station in the name of Trinity Broadcasting Network (TBN) opened. Other private television stations such as Muvi, Mobi and Prime have since followed. You can also add pay television station M-Net, which was the first outside television station to be beamed in Zambia in 1995.
On January 15, 2010, however, ZNBC launched TV2 which was driven by factors such as rising competition on ZNBC TV from private television stations and difficulties in putting up attractive and competitive programming due to the challenges involved in creating a balance between mandate issues and entertainment programming.
TV2 therefore, is predominantly an entertainment and business channel, catering for all age groups.
Indeed television has come a long way since Kenneth Chibesakunda and Neb Jere appeared on television as black Zambian broadcasters on October 24, 1966.
That history includes popular interviewers like Kelvin Mulenga and Charles Mando in the 60s and 70s respectively, newscaster Haggai Chisulo, the golf commentator of the 80s Cosmo Mulongoti, programmes like talk show Frank Talk with Frank Mutubila and Play Circle with its popular characters Sauzande (Dan Kanengoki) and Maximo (Chanda Mwale).