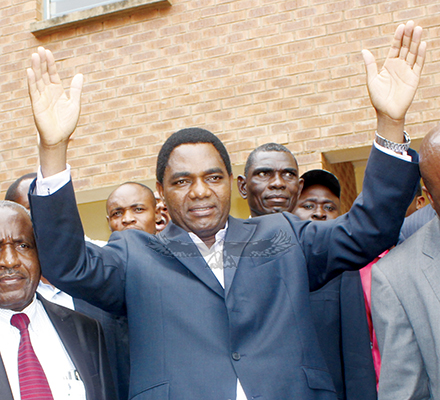 PRISCILLA CHIPULU, Lusaka
UNITED Party for National Development (UPND) president Hakainde Hichilema and five others who are charged with treason were yesterday commit-ted to the High Court for trial.

And UPND cadres caused commotion at the court yesterday when they roughly whisked their vice-president for administration Geoffrey Mwamba away after word went round that police were planning to arrest him.
Lusaka principal resident magistrate David Simusamba committed the six to the High Court after receiving instructions from the office of the Director of Public Prosecutions (DPP).
When the matter came up, State advocate Chimbeka Sakala told the court that he had received instructions from the office of the DPP.
“On behalf of the Director of Public Prosecutions, I invite this court to commit Hichilema, Hamaleka, Hachinda, Mulilanduba, Haloba and Chakawa to the High Court in the case of The People vs HH. Unless the defence team wants to address the court, this matter comes up for committal to the High Court for trial,” Mr Sakala said.
Magistrate Simusamba then announced that he had seen the instruction from the DPP to commit Hichilema and the five others to the High Court.
“These are the instructions issued by the DPP to the accused persons. I am hereby, with authority, commit the accused persons to the High Court for trial,” he said.
Last week, Hichilema’s lawyers abandoned the judicial review the court had advised them to seek in the High Court since he did not have the jurisdic-tion to make a decision on the validity of the committal certificate.
Mr Simusamba had granted Hichilema’s lawyers leave to seek the judicial review after they insisted that they could not accept the committal letter which was issued by a mere State advocate instead of the substantive DPP Lillian Siyuni herself.
Meanwhile, some UPND cadres caused commotion when they whisked away Mr Mwamba after a rumour that police were planning to arrest him af-ter the court session.
Four UPND cadres ran towards Mr Mwamba, grabbed him and hastily took him to a vehicle parked outside the court, leaving onlookers and judiciary employees wondering what was happening.
In what appeared to be like an action movie scene, Mr Mwamba was then taken to UPND ally Nevers Mumba’s vehicle, which sped off leaving police officers at the magistrate’s courts entrance in awe.
The agitated cadres were heard saying police wanted to pounce on Mr Mwamba after the court session.
Earlier, when Mr Mwamba entered the courtroom he told journalists who were seated in the media gallery that he had not fled the country as some media had been reporting.
He then demanded to know where a Daily Nation reporter was sitting, but no journalist responded.
“Where is Richard Sakala’s journalist, where is he seated? … They lied that I was seeking asylum, why? They think I can leave my beautiful country and my wife?” he said.
Mr Mwamba, who was reportedly not well last week, was granted a one-month adjournment through his lawyer Zevyanji Sinkala to seek medical atten-tion.
The court heard then that he was unwell and undergoing a medical operation outside the country.