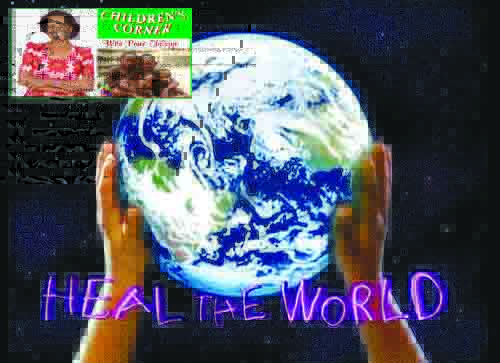 Children's Corner with PANIC CHILUFYA
IN 1991, American recording artist, dancer, singer-songwriter, musician, and philanthropist Michael Jackson released the song Heal the World, a soft rock and gospel genre, to draw attention to the suffering of children living in third world countries, especially Burundi, which was going through unrest at that time.

This song came to mind on Friday June 16 as the continent commemorated the Day of the African Child (DAC) under the theme: ‘Accelerating protection, empowerment and equal opportunities for children in Africa by 2030’. It highlighted the importance of promoting child rights by ensuring permanent change in the lives of children across Africa.
In the same year, the Organisation of African Unity (OAU) initiated the Day of the African Child (DAC) in remembrance of the June 16, 1976 student uprising in Soweto, South Africa. Students from various schools protested on the streets of Soweto in opposition to the decision by the apartheid government to introduce Afrikaans as the medium of instruction in local schools. It is estimated that the 20,000 students who took part in the protests met with fierce police brutality; that resulted in fatalities. Although the official number given was 176, it is alleged that actually up to 700 student protesters were killed.
The OAU and its successor, the African Union (AU), have used the DAC to remember those children who lost their lives, and to celebrate all children in Africa. The day is also used to inspire a sober reflection and prompt action towards addressing the challenges that children on the continent face on a daily basis.
Although it is 41 years after the Soweto uprising, 26 years of celebrating DAC and when Michael wrote this song; children are still faced with and suffer the worst forms of injustices. The rights of children are being routinely violated in the home, school and communities they come from. Some of the violations like early marriages and prostitution have been accepted as the norm due to traditional cultures and practices. Others include exposing children to poverty, subjecting them to various forms of labour, abuse and the non-availability of quality education and health services.
The significance of this song in relation to the rights of children cannot be over-emphasised; Michael might have been motivated to encourage people to make the world a better place for humanity, with special emphasis on children and young people who are in the majority not only in Zambia but globally as well. Sadly, it is this same group of people who are marginalised and vulnerable in some societies.
The tone he used in the song was very gentle and peaceful in order to promote peace and harmony; the vocal sounds were filled with love.
Michael must have been feeling immense compassion for the suffering peoples, especially children, when he wrote Heal the World. Very often, those who are privileged overlook the suffering of others, including children and young people. Such people tend to take their privileged life for granted, they hardly spare a thought for the less fortunate; some are within the communities where they live.
The language in the song was inclusive. For example, Michael Jackson used words like: “You and me…” and “The entire human race…” meaning everyone has the responsibility for the protection of rights, promoting empowerment and equal opportunities for all children through the several sustainable development goals as espoused in The African Charter on the Rights and Welfare of the Child. This fight is not only for respective governments; everyone has a role to play by ensuring that no child is left behind through the implementation of civil, political, social, economic, or cultural rights, come 2030.
In a 2001 Internet chat with fans, Michael said that Heal the World was the song he was most proud of. He later created the Heal the World Foundation, an organisation aimed at improving the lives of disadvantaged children. He also used it as a means to teach children how to help other people who were less fortunate.
During his over four decades as a global figure, Michael, who was referred to as the King of Pop, was recognised by Guinness World Records as the most successful entertainer of all time through his contribution to music, dance, and fashion. Although he died in 2009, his message to make the world a better place for humanity and children in particular still lives on.
Remember, children are our future, until next week, take care.
For comments: pcmalawochilufya@yahoo.com