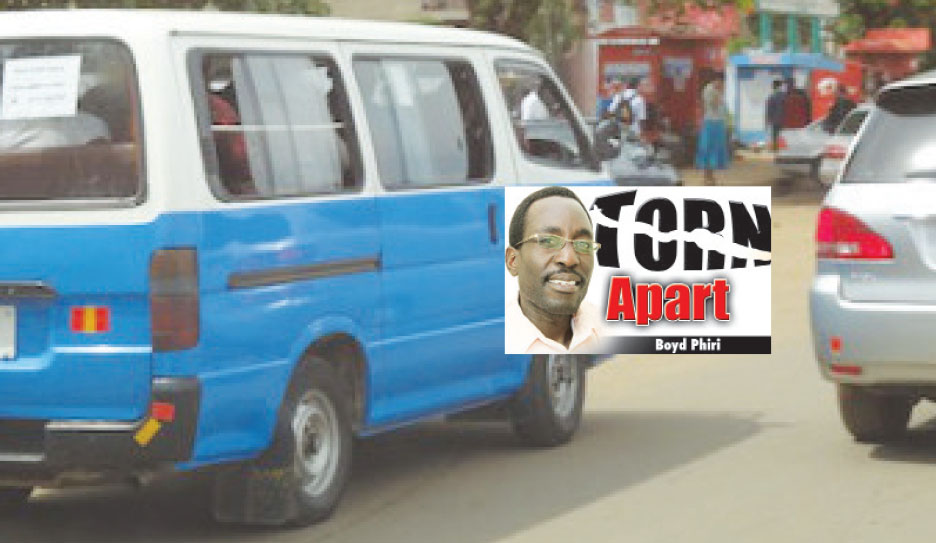 TORN APART with BOYD PHIRI
TRAVELLLING on public transport can be entertaining, especially if the stocky fellow seated next to you does not dig his elbow into your ribs to selfishly create enough room for himself.
I donâ€™t know about you, but more often than not I have fallen prey to the bad habits of some passengers who misuse the scientific teaching which says matter is something that occupies space.
Who says people who look like they have tapeworms in their stomachs eating up everything do not need enough space for themselves?
But truth be told, elbow or no elbow, minibus taxis can give you a handle on many things, including sleep-starved commuters who dose off on other passengersâ€™ shoulders.
You have to constantly shrug one off your shoulder before he can realise that he is not in bed at home.
While one snoozes on your shoulder, your worst fear would be to hear something sounding like calico tearing from him. But I must admit, I have not heard any passenger produce such a sound on the bus while dozing.
And donâ€™t think bus conductors give a damn about whether one is suffering from sleeping sickness or not.
One moment of oneâ€™s unattentiveness to their disembarking call at the next bus-stop would force one to get off at an undesignated place to walk a kilometre back to the intended destination.
No words can tell how mad it makes one to walk back when he or she should have disembarked at the right place.
Yes, you meet people along your way, some strangers, some friends and some strangers who become friends after rescuing you from a callous conductor demanding a full bus fare from you.
The temperature in the bus would be hot – passengers packed like pilchards in a tin. The noise would be ear-splitting and more than anything, you would be looking forward to disembarking at the next bus stop to cool off.
The only reason you would not get off is traffic jam, or the sight of someone you owe some money seated near the door.
When you sense that you might be in trouble with the one you owe money on the same bus, keep quiet, lest the beautiful woman you ogle on the bus and hope to escort after getting off must know your financial plight.
There is nothing most people fear more than unexpectedly meeting people they owe money, especially in public.
Indeed, sometimes some of these people you meet on the bus make their presence felt, like those who dose off on your shoulder.
You would be lucky if they did not leave a smudge of saliva on your clothes by the time you shrug them off when disembarking at the next bus-stop.
But fights do start on mini-buses, too. The other day, while on a ride to town, I found myself separating two feuding people on the bus â€“ a conductor and a mildly-insane man.
It all started when some passengers demanded their change from the conductor, who initially appeared not keen to give people their money.
The mildly-insane man took it upon himself to speak for the passengers who were demanding for change.
This did not amuse the conductor. A fight ensued on board. For a moment, I thought we would all end up at the police station as witnesses because at that time, someone was already bleeding from the nose.
We tried to let the driver know that the person his conductor was fighting was not normal, but he could not take heed and threatened to deal with the stranger at the station in town.
I do not take pleasure at seeing people fight with bare knuckles, and it was then that I forced the driver to pull over so that I could get on another bus.
I am not sure how it ended, but the last words I heard from the insane man was a promise to the bus crew of serious trouble, which could see their bus damaged.
At this moment, one also needs to be careful not to start a political debate without knowing the political allegiance of the people on the bus. If you loudly announce your candidate is winning, other passengers would noisily agree or disagree with you. Equally, if you happen to be on a bus with another candidateâ€™s supporters, they would also agree or oppose you. You must be careful never to argue when you are outnumbered by supporters of a candidate you feel is not winning.
The safest candidate to bank on when you are travelling on a bus is Alex Muliokela or some other unpopular candidate who will attract friendly debate on jokers and clowns in Zambian politics.
Travelling on a mini-bus can be fun or a nightmare depending on how lucky you are. If you are a â€˜some of usâ€™ (upper class), some unruly conductor will pick on you when you complain of a myriad of shortcomings like over loading, smelly arm-pits thrust in your face, welded extra seats, stopping at undesignated stations, loud music and over-speeding.
A conductor would remind you that if you are a gentleman or lady that you claim to be, why donâ€™t you book a taxi or buy a car of your own.
There is no winning on Zambian mini-buses because the driver and conductor are in total control.
bjboydphiri@yahoo.com