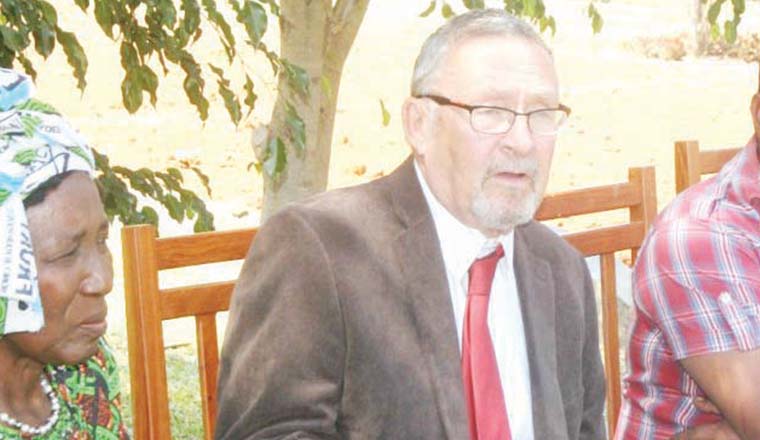 From JIMMY CHIBUYE in Kasenengwa
VICE-PRESIDENT Guy Scott has urged the electorate in Kasenengwa to support the Patriotic Front (PF)â€™s development agenda by voting for its parliamentary candidate Gideon Zulu in next Thursdayâ€™s by-election.
The Vice-President has also assured the people of Kasenengwa that he has accelerated payments to farmers who supplied maize to the Food Reserve Agency (FRA).
Speaking when he addressed a public rally to drum up support for Mr Zulu at Kamutemeni village here yesterday, Dr Scott urged the people of Kasenengwa to vote for Mr Zulu for them to benefit from development projects that President Sataâ€™s administration is implementing countrywide.
The Vice-President held three other meetings at Samuel School grounds, Chiparamba showgrounds and Mkowe School grounds.
â€œWe are putting up mobile phone towers, hospitals and clinics, schools, roads, and these are done all over the country.
â€œIt is not one person bringing this development but it is spearheaded by one leader called Michael Sata and I assist him, then we have other officials like ministers and provincial ministers but the most important person to coordinate all these programmes is the member of Parliament (MP). So give us the MP here,â€ he said.
Dr Scott said PF believes in sharing its achievements and the ruling party wants to share the development projects with the people of Kasenengwa.
Dr Scott said PF is delivering on its 2011 campaign promises and hopes to win 2016 general elections.
On payments to farmers for maize supplied to FRA, the Vice-President said the people of Kasenengwa should expect their money soon because instructions to pay them have been issued.
And Mr Zulu promised to work extra hard and to prioritise the interest of the people if he is elected into office because he has already been working like a parliamentarian in the area.
Former MMD Kasenengwa constituency chairperson Gabriel Mbewe and four other constituency officials defected to PF at the rally.
And Eastern Province Minister Malozo Sichone said people should not be cheated by the MMD that the PF is not working.
The Kasenengwa seat fell vacant following the Supreme Courtâ€™s decision to nullify the election of MMDâ€™s Victoria Kalima.
Others contesting the seat are Mr Zulu (PF), Ms Kalima (MMD), Timothy Nyirenda (UPND) and Khumbiza Daka (UNIP).
And Zambia News and Information Services (ZANIS) reports that Dr Scott has directed Mr Malozo Sichone to ensure that the Food Reserve Agency (FRA) does not buy maize smuggled from neighbouring countries.
Speaking when he addressed a public rally to drum up support for Patriotic Front (PF) Vubwi parliamentary candidate Margaret Miti at Vubwi School grounds on Tuesday, Dr Scott said he is concerned that some people are smuggling maize into Eastern Province with intentions to sell it to the FRA.
The Vice-President said the FRA should buy locally produced maize to empower Zambians and for strategic reserves.
He is happy that Government has already exceeded its target of purchasing 500,000 metric tonnes of maize.
And Luangeni member of Parliament Charles Zulu said the Rural Electrification Authority (REA) will spend K6 million to connect Vubwi district to the national electricity grid.
He said Government is drilling boreholes to ensure citizens have access to clean drinking water apart from the roads, health facilities and schools it is building.
And Ms Miti pledged to enhance the development that President Sata has initiated.
The Vubwi parliamentary seat fell vacant after the Supreme Court nullified the election of MMDâ€™s Eustarckio Kazonga due to electoral malpractices.
Dr Kazonga is re-contesting the seat. Others in the race are United Party for National Development (UPND) candidate Alfonso Phiri and the Forum for Democracy and Development (FDD)â€™s Charles Nyoka.