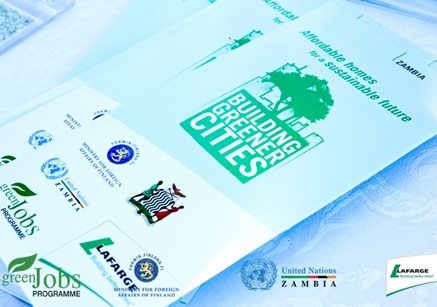 KELVIN KACHINGWE, Lusaka
EVEN though the green economy is a new appeal in sustainable development, sometimes little attention is paid to it. Often, interest is only in measuring economic growth through real gross domestic product.
That is perhaps why the Zambia Green Jobs Programme, a partnership between the government and the United Nations is significant.
The UN agencies involved are the Food and Agriculture Organisation (FAO), the United Nations Environment Programme (UNEP), the United Nations Conference on Trade and Development (UNCTAD), the International Trade Centre (ITC) and the International Labour Organisation (ILO).
Led by the ILO, with financial assistance from the Finnish government, the Green Jobs Programme aims at promoting more and better jobs for inclusive green growth in sectors where goods and services can be produced with an environmental benefit.
At a recent workshop in Lusaka, the programme released its annual impact report, documenting progress and achievements towards targets.
It was attended by representatives from the Ministry of Labour and Social Security; Ministry of Commerce, Trade and Industry; National Pension Scheme Authority (NAPSA) and the Association of Building and Civil Engineering Contractors.
Others were the Copperbelt University; University of Zambia (UNZA) and Zambia Environmental Management Agency (ZEMA) amongst others.
The meeting acknowledged that the programme had made significant progress in 2014, which was considered as the effective initial implementation period.
The meeting started with an overview of the 2014 annual report and the logic behind the reporting of results, given by the ILO office communications officer Helene Thor, followed by a presentation by assistant programme manager Karl Pfeffer on emerging results during 2015.
During the question and answer session, which concluded the meeting, several topics and issues were raised such as the role and function of the Zambia Green Building Association and the importance of the upcoming green building guidelines.
Other issues were the importance of environmental impact assessments, the definition of a green building and the green job creation potential of the Zambian construction industry.
It was pointed out that working together with partners, the intended targets of the green jobs programme will be met and it was stressed that changing mind-sets to green construction technologies and approaches continues to be a main task for the programme.
According to the summary of the report, the programmewhich started on September 1, 2013, benefited more than 3,000 building construction micro, small and medium-scale enterprises.
â€œOut of these, 866 reported significant enterprise growth, creating 331 new green jobs and improving the quality of 417 green jobs through improved rights at work such as access to occupational safety and health, extending social protection floors and better adherence to labour laws.
â€œThis benefited more young people, those aged below 35 years, than adults but with less women beneficiaries than men.
Advancing gender equality, and in particular the economic empowerment of women in building construction, remained a challenge,â€ the report reads.
Still, progress was made in supporting women entrepreneurs such as formation and strengthening of the Zambia Association of Women in Construction (ZAWC) as well as increasing their share of market opportunities, especially in the low-cost housing residential market segment.
Going forward, the Green Jobs Programme in Zambia is expected to create 5,000 new green jobs by 2017, thanks to the partnership between the government and the construction sector.
One of the interesting stories in the construction sector the programme has been involved in is the training of entrepreneurs in eco-friendly building techniques.
One of the successful stories is that of Omba Lacey, one of the many dynamic entrepreneurs from Lusaka who has joined the programme.
She has been running a house construction business since 2007, and last year took part in an ILO training course on starting and improving oneâ€™s green construction business.
The training was an eye opener for her.
â€œI had never even considered using sustainable materials in my work before. Now I know I can use local material such as clay and earth bricks and timber in construction,â€ she says.
â€œWe recently constructed a house where I could put what I learned into practice. I saved a lot of time and money.â€
Together with the other 15 men and women who also attended the same training, they decided to establish a green consortium to deliver green goods and services.
â€œI saved a lot of time and money by using locally-sourced materials such as timber for roofing, door and window frames, compressed earth bricks for the walls, rainwater harvesting for water and solar panels for energy. The cost of building a house can be slashed by up to 70 per cent, which also makes houses more affordable for everyone,â€ she explained.
Ms Lacey was also taught not to cut down all the trees at a construction site, and to use the timber of the trees she had to clear to build the house.
Before, she would import materials like aluminium and steel from countries like South Africa and China, which was not only costly but also bad for the environment.
The construction sector has played a central role in Zambiaâ€™s growth in recent years, and has been identified as having the potential for the creation of green jobs.
Presently, the construction sector makes up about 21.1 percent of the economy.
Part of the sectorâ€™s potential lies in housing.
According to Zambiaâ€™s Vision 2030, the total housing unit backlog is about one million, and 110,000 dwelling units are required annually to clear the backlog for the next 10 years, while to satisfy new demand for houses all over the country, a similar number is required annually to be constructed.
A 2012 recent industry analysis by ILO indicates that Zambia requires 1.3 million new houses to achieve Vision 2030; that is one house every two minutes of each working day for the next 19 years.
â€œIt [construction sector] can contribute to reducing greenhouse gas emissions through the promotion of eco-friendly building materials, services, goods and technologies such as energy saving, renewable energy and water conservation,â€ says Zambia Green Jobs Programme chief technical advisor Tapera Muzira.