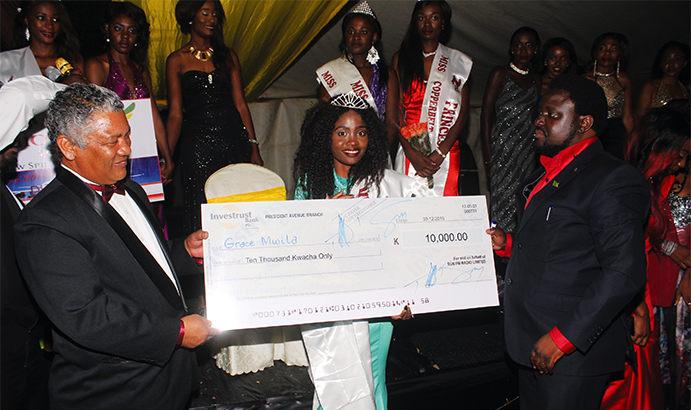 STAFRANCE ZULU, Ndola
GRACE Mwila, a 20-year-old student teacher at Crossway School of Education in Ndola, beat 11 other contestants to win the Miss Copperbelt/Face of Sun FM beauty pageant that was held at The Urban Hotel in Ndola last Saturday.
For her feat, Grace walked away with K10,000 cash prize and becomes the Copperbelt ambassador who will be expected to raise awareness on environmental issues as well as childrenâ€™s rights.
It was a highly competitive pageant, which drew participants from all the major Copperbelt towns. The winners were spread among four Copperbelt towns.
While Mwila hails from Ndola, the First Princess, Jacinta Chanda, 18, is from Mufulira; the Second Princess, Edina Kolala, 21, is Chingola-based; and the Miss Personality, Jubily Shinga, 20, is a Kitwe resident.
The First Princess got a return air ticket to Dubai sponsored by Ethiopian Airlines while the Second Princess walked away with K1,500 from Meit Technologies and the Miss Personality pocketed K700.
Mwila brought with her some experience to the competition; she is a former Miss Natwange Primary School queen, a title she won at the age of 14 in 2006.
She also participated in the Miss Convent beauty pageant but walked out without any title. But that did not discourage her from taking part in another pageant as she participated in the Miss Valentine 2014 pageant where she emerged Second Princess.
And now, she has got the big one.
Other than coming up with the Copperbelt Ambassador to raise awareness on environmental issues and the welfare of children, the Miss Copperbelt/Face of Sun FM seeks to promote the fashion industry and modelling career.
Grace has promised to undertake her duties as Miss Copperbelt/Face of Sun FM to the best of her abilities.
â€œTo start with, I want to engage the Ndola City Council (NCC) on the best way to collect littered paper for possible recycling. I learnt a lot during the tour of Zambezi Paper Mills on how disposed paper materials is being recycled into colour toilet paper,â€ she says.
Mwila, who thanked the other models for giving her a good run, appealed to parents and guardians to support their children that are aspiring to be models. She attributed her achievement to her mother who she says has always encouraged her in her modelling career.