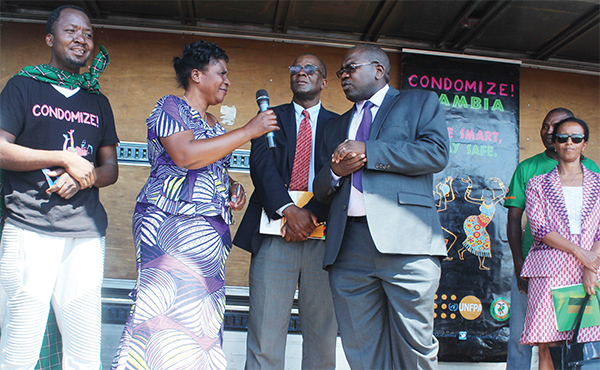 MIKE MUGALA, Lusaka
GOVERNMENT together with various stakeholders have scored success in the fight against Acquired Immune Deficiency Syndrome (AIDS) since 2000 when the first national strategic plan was launched.

The country has recorded remarkable results in halting new infections and reducing AIDS related deaths.
According to the Ministry of Health, new infections among adults have reduced from 67, 000 to 46, 000 while those for children aged between 0-14 years have dropped from 23, 000 to 8,900.
AIDS related deaths have reduced from 69 000 to 20,000 and out of the estimated 1, 060, 000 people living with Human Immune Virus (PLHIV) 800, 000 are currently on Anti-Retroviral Therapy (ART), while around 3, 000, 000 are annually counselled, tested and know their HIV status.
As at December 2016, there were 1,800 health facilities countrywide providing HIV testing and counselling services and the number of ART sites increased from 509 in 2011 to over 870 in 2016.
Despite these achievements, Zambia is still among the top 10 countries in the world with the highest number of PLHIV.
In its quest to end the HIV/AIDS pandemic by 2030, Government recently launched the National HIV/AIDS Strategic Framework (NASF) 2017-2021.
It is the fifth in a series of National HIV/AIDS strategic frameworks and is a five-year strategy also aligned to the Vision 2020 0f 90 percent of people knowing their HIV status, 90 percent of people of PLHIV having their viral loads suppressed and 90 percent of People PLHIV to be on Anti-Retroviral drugs (ARVs).
The NASF 2017-2021 has been developed to provide adequate support and opportunities for communities, civil society, and private sector and government institutions to actively participate in the implementation of HIV/AIDS programmes.
The framework will support decentralised implementation of the fight against HIV/AIDS with the involvement of PLHIV, communities and the marginalised populations so as not to leave anyone behind.
Its main objective is to reposition the prevention of new HIV infections as the main focus of the national multi-sectoral HIV and AIDS response with specific reference to social and behavioural change communication, comprehensive condom programming, voluntary medical male circumcision, Sexually Transmitted Infections, HIV testing services, elimination of Mother to Child Transmission (MTCT) and treatment.
Social and behaviour change communication strategy aims at promoting positive behaviour by using different methods such as one-to-one talks, group discussions, community dialogue, individual and group counselling and also advocacy using drama, radio, television and print media.
Condoms are critical in preventing new HIV and sexually transmitted infections as well as unintended pregnancies.
In the strategy, comprehensive condom programming will address various components by developing a national condom support team; conduct a situation analysis; develop a comprehensive integrated strategy; develop an operational plan and budget and linking the operational plan to a national commodities security plan.
To achieve this, the comprehensive condom programming seeks to mobilise financial resources, strengthen human resource and institutional capacity by strengthening advocacy and engaging in the media, monitoring programme implementation and conducting research.
The framework will expand access, demand and use of condoms among sexually active populations, it will also improve the supply chain and management of condoms.
Medical male circumcision on the other hand offers a 60 percent reduction to the risk of HIV infections to circumcised men.
The framework aims to increase the number of health facilities providing safe male circumcision services and increase the number of HIV negative males including neonates accessing safe male circumcision services by 2020.
NASF 2017-2012 seeks to increase availability and accessibility of voluntary medical male circumcision in all hospitals and health centres as part of an integrated package of HIV and STI prevention.
The NASF seeks to support improved screening and management of STIs  as an integral component of the HIV prevention strategy.
STIs increase susceptibility to HIV infections for several reasons hence the need to have interventions that specifically address this aspect of the response.
Zambia adopted a syndromic management approach for STIs in accordance with World Health Organisations (WHO) recommendations.
This approach will allow the frontline health care providers to manage STI patients without laboratory based diagnostics which are not readily available at subnational level health facilities.
Zambia has also adopted a test and start strategy which entails that every person who tests positive should be placed on ART immediately.
HIV testing is the gateway to HIV prevention, treatment, care and other support services. In this case, people’s knowledge of their HIV status is crucial to the success of HIV response in Zambia.
Under the NASF, substantial investments have been in expanding prevention of PMTC services nation-wide.
Treatment, care and support in the context of HIV/AIDS encompasses a range of actions and interventions at various stages including pre-ART, viral load suppression, nutrition and psychosocial support.
In accordance with the new treatment guidelines, the NASF has adopted a test and treat approach.
Minister of Health Chitalu Chilufya has expressed optimism that the NASF can contribute to ending HIV/AIDS in Zambia if people take HIV/AIDS testing and other prevention methods seriously.
Dr Chilufya urged the people not to wait for the immune system to be weak before they go for testing.
“People must be bold to go and have themselves tested even when they are in good health. This is the only way that will we will conquer AIDS as a country,” he said.
And American Ambassador to Zambia Eric Schultz said his government is committed to helping Zambia end AIDS by 2030.
Mr Schultz said the American government has invested over $ 3 billion in the fight against HIV/AIDS since 2004.
“The American government and its citizens are strongly committed to partnering with Zambia for an AIDS-free generation. My government recently pledged US$4.3 billion to the Global Fund, from which Zambia will benefit,” he said.