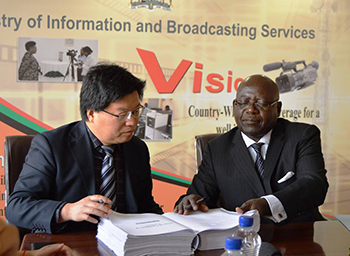 LINDA NYONDO, Lusaka
GOVERNMENT has signed a contract worth over US$273 million with Star Software Technology Company of China to undertake phase two and three of Zambia digital migration.
Ministry of Information and Broadcasting Services (MIBS) permanent secretary Godfrey Malama said the US$273,154,281 contract is made up of major components which include supply, delivery, installation and commissioning of digital terrestrial broadcasting to cover the rest of the country.
Mr. Malama said the contract comes as a result of all the tender processes and procedures that the Ministry satisfied adding that the deal has been cleared by the Attorney General.
Speaking during the signing ceremony Mr. Malama said the contract will also include supply, delivery, and installation of studio equipment for Zambia National Broadcasting Co-operation (ZNBC) and Zambia National Information Services (ZANIS).
â€œThis will also include the supply of 1, 250, 000 customer receiving units (decoders, antennas and dishes) and ten (10) new provincial broadcasting stations that the Ministry of Information and Broadcasting Services (MIBS) is establishing,â€ he said.
Mr Malama also said the contract will also see construction of six Provincial Broadcasting Stations, a National Operations Centre for the Public signal Distributor and rehabilitation of ZNBC and ZANIS studios.
He said the contract also includes ten customer care centres with Lusaka and Copperbelt having two each and one in the remaining provinces he said.
â€œAs you are aware, Zambia is implementing the Digital Migration in phases, and phase one of the project was successfully completed in May this year,â€ he said.
â€œAs a result of that, Zambia is one of the four countries in the region that partially met the ITU deadline of 17th June 2015. In line with this phased plan, I am glad that today we have signed the contract with Star Software Technology Company Ltd to undertake phase II and III of Zambiaâ€™s migration project,â€™â€™ he said.
Mr Malama said Government is funding the Digital Migration project as a demonstration of its commitment to ensure Zambia moves with the rest of the world in embracing the digital television broadcasting technology.
He said when implemented in full, the project will create 505 direct jobs andÂ  2,000 indirect jobs, which will also be created from agents, technicians and others adding that the said jobs do not include many more that will be created in the creative industry.
â€œAs you may be aware, Government has put a condition that when the digital migration project is fully completed, broadcasting will have to meet a 35 percent threshold of local content. I therefore, urge the youths to take advantage of this opportunity by producing local content to fill many channels which will be launched,â€ Mr Malama said.
And Star Software Technology representative Ken Xie said his company is happy to undertake phase two and three of the project which will complete Zambiaâ€™s migration from analogue to digital television broadcasting.