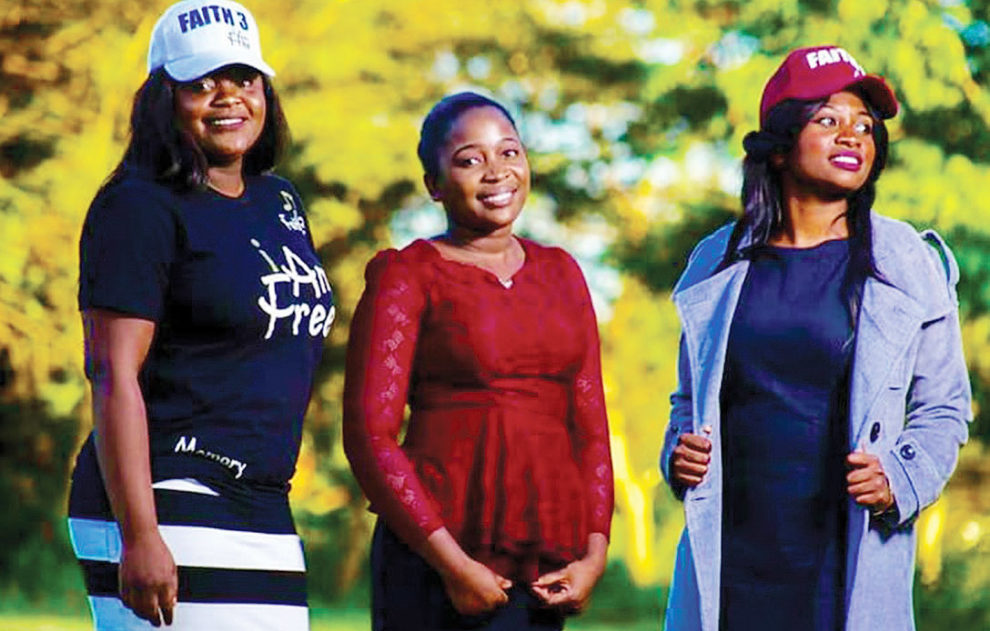 CHOMBA MUSIKA, Lusaka
GOSPEL trio Faith3 has released its inaugural single titled No Longer a Slave, whose lyrics are a bold statement in defiance against fear.
The all-female band’s spiritually nourishing song will premiere on Phoenix FM today between 07:00 and 08:00.
The two-minute and 40 seconds melody was composed by the three vocally gifted band members; Racheal Malambo, who does soprano and alto, Chomba Chilombo, an alto and soprano and Memory Mangambwa who sings contra-alto.
Faith3 manager Aaron Mubanga told the Weekend Mail that all is set for the launch of the song, which will form part of the trio’s debut album anticipated for release next year.
“We are doing a fresh release of a single, No Longer a Slave, which was originally released in 2015,” Mubanga said.
The song is a must listen to because “it will encourage people to have a positive outlook on life”.
It also stimulates an attitude of optimism, which is an enemy of fear.
“Some say fear is false evidence appearing real. Sometimes we fail to achieve what we are capable of achieving simply because of fear,” Mubanga said.
He said the song will encourage people to be courageous in the midst of terror.
“This song is a bold statement of defiance against the very idea of fear. Nothing can be more powerful, more inspiring, than an attitude of optimism in the face of challenges,” Mubanga said.
He said No Longer a Slave is a timely song especially that the world is naturally full of anxieties.
“As a nation and as individuals, we are often on the crossroads yet we often fail to progress because of fear.
“So, if we may preach that ‘we are no longer slaves to fear’, we can go out in faith and put in the very best of our efforts to achieve anything,” Mubanga said.
And giving a profile about the trio, Mubanga describes Faith3 as a harmony of three voices blended to deliver soul inspiring pieces that leave the listener refreshed and yearning for more.
“Even though they first started to sing together 12 years ago, they took an involuntary musical break for some time. But their abiding love for music saw them reunite recently,” he said.