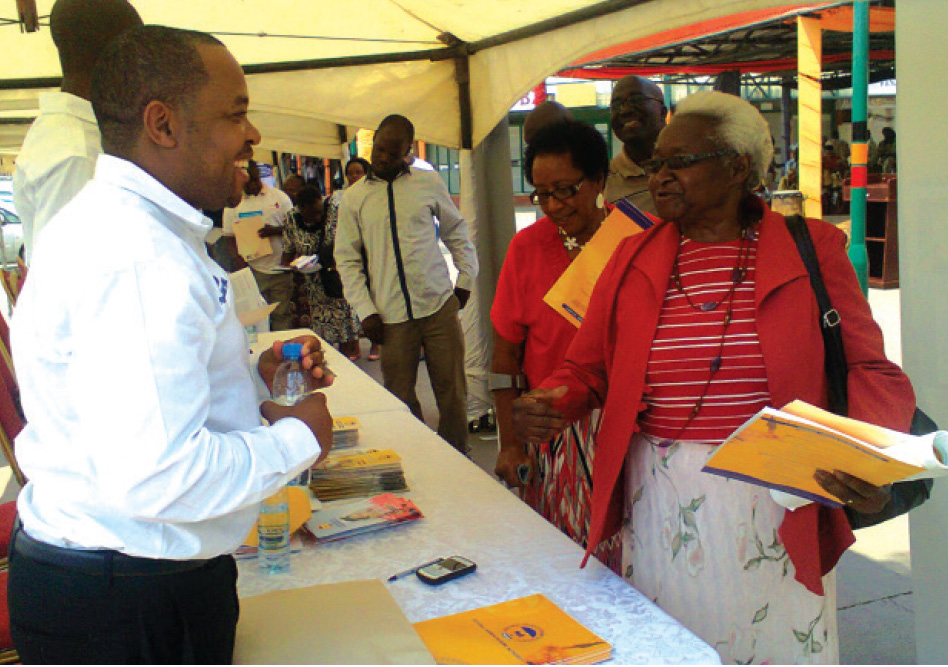 Some of the people who participated in commemorating the International Day of Elderly Persons captured at an exhibition stand at Arcades Shopping Centre in Lusaka.

MAPALO LUPUPA, Lusaka
OCTOBER 1 marked the 24th anniversary of the International Day of Elderly Persons (IDOP) and this yearâ€™s commemoration was themed, â€œLeave no one behind: Promoting a society for all through social protection.â€
Zambia joined the rest of the world in commemorating the IDOP which is an annual event.
In commemorating the event, the Platform for Social Protection (PSP) in partnership with the Senior Citizens Association of Zambia (SCAZ) observed what they called the â€œsocial protection weekâ€ from September, 29 to October, 6.
The social protection week was committed to raising awareness and broadening the publicâ€™s understanding of social protection. During that period, the Global Age Watch Index was launched on October 1, in Lusaka.
Despite the invaluable role that the older persons play in society as leaders, caregivers and volunteers, they are still vulnerable to discrimination, abuse, neglect and violence
However, Government has expressed commitment to tackling the vulnerability of the elderly because of their potential to provide valuable human resource and knowledge required in accelerating development and the attainment of Millennium Development Goals (MDGs).
Minister of Community Development, Mother and Child Health, Emerine Kabanshi said: â€œGovernment will continue seeking counsel from older persons on how to govern the country as they act as a reservoir of cultural heritage and national building.â€
Ms Kabanshi said the aged need government support because they are usually caregivers who take on added and often unexpected responsibilities, typically with little necessary resources.
She said older persons suffer various forms of depravation therefore need to be helped with different kinds of social protection schemes. The minister said this would enable the aged and their families to have a chance for a decent life beyond mere survival.
With the 2015 MDG deadline in sight and 82 percent of the population of the elderly living in abject poverty, government wants to renew its commitment to strengthening social protection.
â€œThe implementation will be done through a system that is solidly backed by financial, legislative and policy framework. This is in light of the National Social Protection Policy (NSPP), which was approved in June and is awaiting implementation,â€ Ms Kabanshi said.
She said, â€œThe policy pioneers a shift in social protection implementation in Zambia as it champions a more comprehensive and integrated approach to social protection as a tool for sustainable poverty reduction.â€
The NSPP is based on four pillars of social protection which are protection, prevention, promotion and transformation. This is will be achieved through social assistance, social security, livelihood, empowerment and protection.
â€œI am glad that organisations such as PSP and SCAZ have come-up to complement social protection initiatives that support governmentâ€™s efforts in recognising the welfare of the elderly,â€ Ms Kabanshi said.
Ms Kabanshi said the need for social protection cannot be underestimated because it plays a critical role in economic growth.
â€œSocial protection offers a limit to insecurity and encourages the poor who are mostly elderly to take bold choices on how to improve their livelihoods,â€ she said.
Furthermore, she said, â€œAs donors continue recognising the value of social protection initiatives in achieving the MDGâ€™s, government reaffirms its commitment to restoring livelihoods and food security.â€
The Global Age Watch index 2014 highlights the condition of elderly people in 96 countries.
â€œIt points out countries which are doing best for their older populations, how this links with policies towards pensions, health, education, employment and the social environment in which older people live, Zambia included this year,â€ University of Zambia lecturer, Isaac Kabelenga said.
SCAZ executive director, Rosemary Sishimba said the Global Age Watch Index measures the well-being of the aged in four key areas which are income, security, health, and personnel capability so as to create an enabling environment for decent livelihoods.
In the enabling environment domain, Zambia ranks low at 84 due to the small percentage of older persons feeling safe at 34 percent. In the health domain, Zambia ranks lowest at 91 with values below the regional average on all indicators, while in all income security domain, it ranks 91 with low pension coverage of 7.7 percent.
Ms Sishimba also said Zambia has the highest old age poverty rate at 22.9 percent.
She said, â€œthe latest results from the Global AgeWatch Index 2014 provides a great opportunity for the Zambian government to think about implementing universal social pensions and access to health services for people aged 60 plus while facilitating age-friendly environments too.â€
â€œGlobally, the index reveals that one in four people in low and middle-income countries is living without a pension and that policies supporting people in later life exist but need to be implemented faster and more systematically,â€ said Ms Sishimba.
Meanwhile, Platform for Social Protection Zambia (PSPZ) programme assistant, Susan Chiwenda, said her organisation is looking forward to universal pension for the aged to reduce poverty and economic inequalities among the aged.