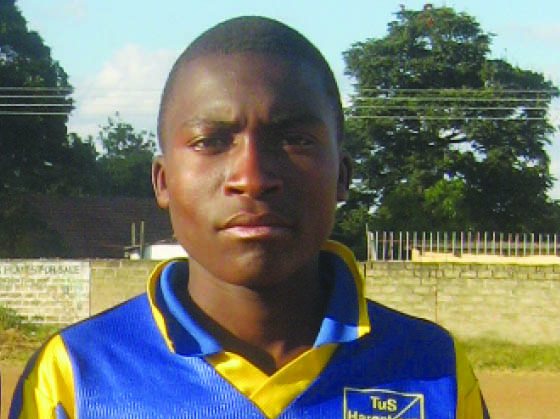 RISING STARS with DIANA MUTAKAFIMBO
THIS week, we feature an article written by a second year journalism student from Evelyn Hone College of Applied Arts and Commerce, Miyoba Michael Zulu.
Zulu profiles a 15-year-old budding football star, Gift Munkombwe of Chilenje Happy Hearts Soccer Academy.
Football is said to be a beautiful game.
Some people think of it as just a mere sport while many believe football is a religion, whether this debate is true or not, we leave it for another day.
The game, which has become big business world ove, ivelihood for millions of footballers.
Manchester City pays Ivorian midfielder Yaya Toure Â£300,000 a week and the 31-year-old is the highest paid player in the English Premiership.
Fifteen-year-old Gift has chosen football as a career that will put food on the table.
BACKGROUND
Born on July 5, 1999 in Lusaka, Gift is in grade seven at Bauleni Primary School in Lusaka.
He is first in a family of three and is under the care of his uncle (his fatherâ€™s younger brother).
Despite his advanced age, Gift is still at primary school and is determined to complete secondary school education.
CAREER
Giftâ€™s aim is to work hard in his football career so that he can achieve his dream of playing for the national team and turning professional.
His passion for the game has made him sacrifice his energy and time just to ensure he sharpens his skill.
â€œI walk from Bauleni to Woodlands Stadium for training so that I can one day achieve my dream of playing for the national team. It is every playerâ€™s dream to represent the country at any level and when that time comes for me, I will receive it with both hands,â€ he says.
Locally, Gift envies playing for Super Division defending champions Nkana while Spanish giants Barcelona are his European team.
â€œI just love Barcelona, I like the way they play their football and they have great players such as Xavi Hernandez, Andres Iniesta, Lionel Messi, the Brazilian right-back Dani Alves and many others,â€ he says.
Despite his favourite team being a Spanish side, Gift feels Brazil are the best national team, which deserved to win the 2014 World Cup.
Gift advised young friends to concentrate on school first.
He also advised young boys and girls to join clubs instead of lazying around at home.
â€œI urge my young friends to concentrate on school first because they say that education is the key to achieving great things. And to those who just sit home waiting for their parents to cook nshima for them, I urge them to join clubs so that they can keep fit and learn something at the end of the day,â€ he says.
IDOL
Gift is inspired by local players such as under-20 international Saith Sakala, who plies his trade with Super Division Napsa Stars ,and Nkanaâ€™s Evans Kangwa, a product of Chilenje Happy Hearts.
Internationally, Gift is inspired by Xavi Henandez, one of the worldâ€™s greatest passers of the ball.
dmutakafimbo@daily-mail.co.zm, 0955-819142