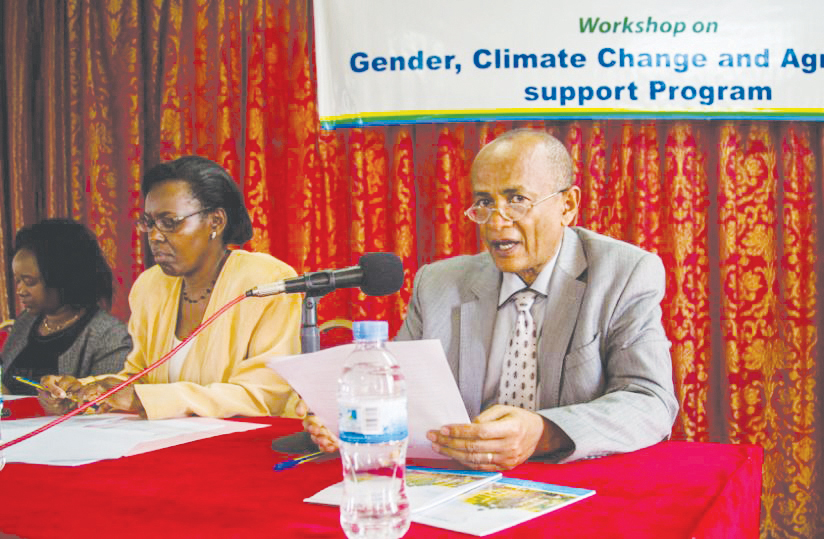 DOREEN NAWA, Lusaka
CLIMATE change has been held responsible many of the social and economic woes affecting mainly the poorest especially rural farmers in Africa and now many are seeing it as one of the root causes of food insecurity in the continent.
Because of the effects various organizations are putting up measures that will help build resilience against the effects of climate change.
And in this regard, African women smallholder farmers are set to benefit from a new five-year project aimed at helping build resilience against effects of climate change.
The New Partnership for African Development (NEPAD) project, dubbed â€˜Gender, Climate Change and Agriculture Support Programmeâ€™ (GCCASP) is a five year programme designed to support regional and country level interventions in empowering rural women and other vulnerable populations to cope better with the adverse effects of climate change, while enhancing their resilience to shocks.
The initiative is set to help empower women farmers who have perennially been marginalised in agriculture planning and decision making.
On September8-9, 2015, stakeholders at a meeting in Lusaka, Zambia, convened to enhance their partnerships and agree on implementing the GCCASP at regional level.
The meeting was organised by the NEPAD Agency and the Common Market for Eastern and Southern Africa (COMESA). Among the meeting participants were representatives from the Norwegian Agency for Development Cooperation, which has been sponsoring the programme from the onset.
Other participants included both non-participating countries and countries that are part of the implementation phase of GCCASP â€“ Cameroon, Ethiopia, Malawi, Niger and Rwanda.
The participating countries will see a total of 170,000 women (36,000 in Cameroon, Ethiopia and Niger; 50,000 in Malawi and 12,000 in Rwanda) benefiting from agricultural support in various interventions against the negative impacts of climate change.
The four main intervention areas are: closing of institutional gaps; capacity building for women smallholder farmers; creation and strengthening of women platforms, and; increased investments in up-scaling successful and innovative practices.
As the lead driver for the GCCASP, the NEPAD agency continues to provide technical support to the countries implementing the programme, as well as mobilising the much needed resources for the delivery of results.
Speaking at a meeting held in Lusaka, Ministry of Gender permanent secretary Daisy Ngâ€™ambi said despite the critical role rural women play in agriculture and management of the family, their role in agriculture planning and decision making is marginalised.
â€œThere is a great need to advance these problems to holistic projects and programmes that include improving food and nutrition security, increasing income for sustainable livelihoods and increasing their participation in all policy and decision making processes. And to ensure that all programmes are gender responsive,â€ Mrs Ngâ€™ambi said.
Rural women and girls generally have limited access to productive assets including land, agriculture inputs, extension services and technology and micro projects.
They also have limited access to social protection and decent employment, an issue the project is expected to solve.
One of the main conclusions is that women smallholder farmers usually have less access to farming inputs than men. They also tend to have less access to cash, needed to buy goods or services. In addition, women control less land than men, and the land they control is often of poorer quality, with insecure land tenure.
Smallholder agriculture, the mainstay of most African countries is the sector that is most vulnerable to climate change. This sector is dominated by women farmers who account for over 80 percent of the continentâ€™s food production.
Climate change affects agriculture, food security, water, energy and health, bringing about frequent and severe climatic shocks that disproportionately affect women. This is because of their limited adaptive capacity and high levels of vulnerability.
And GCCASP programme officer, Edna Kalima said the programme will help smallholder farmers build resilience to climate change
â€œRural women continue to be the most vulnerable to food security and are disproportionally impacted by climate change and other disasters like global financial crisis,â€ she said.
â€œThe programme will, thus empower, women smallholder farmers, youth and other vulnerable people to cope better with adverse effects of climate variability and climate change to enhance the resilience and adaptive capacity of women,â€ Ms Kalima said.
Ms Kalima said five countries namely Cameroon, Ethiopia, Malawi, Niger and Rwanda are part of the implementation phase of GCCASP.
So far a wealth of knowledge has been gathered in the five countries currently implementing GCCASP, through desk reviews, case studies, workshop reports, consultation reports and programme documents. This has helped to deepen the understanding of the many challenges faced by women farmers affected by climate change. The information generated by GCCASP has also helped to identify country priorities and specific intervention areas.
Moreover, best practices in mitigating the effects of climate change are also being identified from the studies conducted in the countries. These best practices will also be shared regionally as well as up-scaled within countries.
By looking at changes already made by farmers to adapt to a changing environment and climate, the need to better understand where possibilities to build climate resilience lie, and which factors drive change cannot be over emphasised.