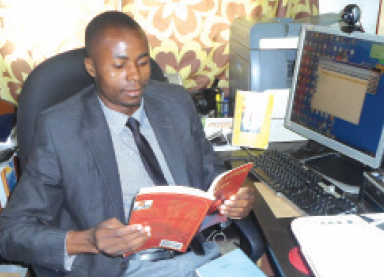 MWAPE MWENYA, Lusaka
GENDER-BASED Violence (GBV) is an old vice that has affected more women and girls compared to men and boys, it is for this reason that there are more women movements fighting the scourge than men.
Government through various line ministries such as Gender and Child Development, Chiefs and Traditional Affairs and Community Development Mother and Child Health has continued denouncing perpetrators of GBV to an extent of advocating for increased jail sentences.
It is interesting to note that some men have individually joined the fight against GBV using different platforms that have since proved effective in society.
Samuel Zulu, 33, of Lusakaâ€™s Chilanga area is an activist against GBV and a novelist who has taken up the fight against GBV through writing of books and giving motivational talks at various fora.
â€œI have been an advocate for GBV since 1996 when I was in primary school. I fought with a female classmate whom I beat so badly that it resulted in my expulsion. This action made me vow never to beat a woman in my life again. Since then, I have been so passionate on issues of GBV and I hate it when a woman suffers silently at the hands of a man,â€ Mr Zulu said.
Mr Zulu is the first born in a family of 10. His parents, who lived in Ndolaâ€™s Misenshi area, were poor.
He lost his father before he started school. At this point, life became bleak as his mother did not have a steady income to take care of the family.
â€œAfter my father died, things became so difficult for my family, though relatives were assisting us, it was still not enough for all the ten children. My motherâ€™s relatives wanted to send us to the village, but my mother objected so we started selling food staffs such as vegetables and kerosene for our upkeep,â€ he said.
Eventually in 1992, Mr Zulu decided to relocate to Petauke to live with his grandmother and eventually started school at Nsenya Pimary School from grade one to four.
In 1995, he went back to Ndola to join his mother and continued school in grade four at Nkwazi Primary School.
Unfortunately, due to financial difficulties, Mr Zulu dropped out of school for two years from 1996 to 1997. He continued in 1998.
Due to his determination to excel in life, Mr Zulu stopped school in 1999 to start a business in order to raise money for his secondary education. He started selling plastic bags, sugar canes and sweet potatoes from Lusakaâ€™s Soweto Market.
â€œI wanted to raise money to go back to school even though my mother encouraged me to do carpentry or tailoring, but I refused because my aim was to finish school and get a good job,â€ he said.
He attended Kamba Primary School from 2000 to 2001 and then moved to Chifubu Secondary School in 2002 in grade 10. But in the same year, he moved to Lubuto High School after he was expelled for fighting with a schoolmate. He completed school in 2004 at the same school.
â€œAfter completing I did a six-month course at Mary Immaculate in Lusaka as an aspirant to become a priest and in 2007 I was sent to Western Province for mission experience to conduct census and missionary works,â€ he said.
Determined and focused as he was, in 2008 he went to Johannesburg at St Joseph Schoolarskurt based in Krazulunata in South Africa to study novice for one year.
When he came back in in 2009 he joined Radio Liseli and worked as a producer and announcer where he introduced a number of programmes.
In 2010 Mr Zulu went to Cameroon to study French for a period of six months and then returned to Zambia.
From 2011/2012 he was at Technical and Vocational Teachers College where he studied teaching methodology and later started teaching at Kansenshi Secondary School in 2013.
â€œWriting has been in me since childhood. My mother used to encourage me to read and write a lot, I even started a press club when I was at Lubuto Primary School. I used to write for The Post newspaper when I was still in secondary school and I was a publicity secretary for the human rights club in school,â€ he said.
Though he never did literature in school, Mr Zulu has always had an interest in reading and writing.
He wants to open a university and to help graduates from colleges and universities to develop an interest in writing as part of his future plans.
â€œI want to introduce the art of creative writing and teach people how to be creative writers. I have come to appreciate my mother who advised me that when you are educated you can stand on your own. So thatâ€™s why I never stopped school despite the main challenges I faced,â€ he said.
Mr Zulu is in a relationship with a woman whom he intends to marry next year. He is currently the head of Education Department at Ambrose College of Education in Chilanga where he lectures in communication skills, Entrepreneurship, English and Ethics.