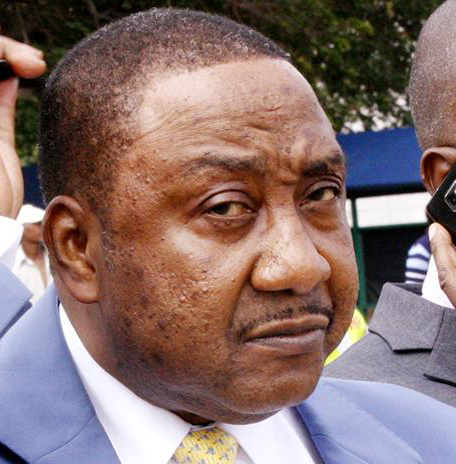 TEDDY KUYELA, Parliament
UNITED Party for National Development (UPND) vice-president Geoffrey Mwamba yesterday reportedly hurled tribal-laden invectives at Patriotic Front Mfuwe member of Parliament Mwimba Malama, sparking a near-punch-up at Parliament.
The Kasama MP threatened to beat up the Mfuwe MP and Chilubi MP (PF) Obvious Chisala, labelling them as people coming from small tribes which Bembas would finish politically.
The former Minister of Defence, who was appointed UPND vice-president in midweek and proclaimed that the party was not tribal, â€˜firedâ€™ at Mr Malama as he entered the restaurant during tea-break at about 10:30 hours.
Pointing at the Muchinga Province Minister, Mr Mwamba teased him, saying the suits he was wearing were because of him and that â€œI am coming into your constituency to finish youâ€.
He said Tabwas and Bisas are small tribes that cannot compete with Bembas. This forced Mr Malama and Mr Chisala to hit back, saying although Mr Mwamba was â€œfat like a bag of mealie mealâ€, he did not have the right and power to threaten and belittle others, especially on tribal lines.
Mr Mwamba gathered himself and charged at the two PF MPs, calling them poverty-stricken and that they would die poor.
â€œGet out…mwenchushi, mukafwa nobupina bwenuâ€¦get out…fumeni apa mwenchushi; loosely translated, â€œget out you poor people, you will die in poverty, get out of hereâ€.
He also dragged late President Michael Sataâ€™s name into the diatribe, saying, â€œwhy didnâ€™t Sata appoint you as Defence minister?â€
But the two MPs were unshaken as Mr Mwamba continued attacking them, bragging about his wealth.
Other MPs and security personnel stepped in to stop the fracas.
When the house resumed sitting after 11:00 hours, Mazabuka Central MP Garry Nkombo (UPND) rose on a point of order saying that during break there was â€œa bad incidentâ€ involving Mr Malama and Mr Mwamba and could have â€œwitnessed a serious fight in the restaurant. I need your ruling sir?â€
But Speaker Patrick Matibini reserved ruling to a later date, saying he needed time to get more information on what transpired and study it.
â€œI reserve the ruling surrounding your point of order. I wasnâ€™t there for me to make a ruling and I need to get information and study it before rendering my ruling on the matter,â€ Dr Matibini said.
On Wednesday, Mr Mwamba was appointed UPND vice-president in charge of administration but refused to relinquish his position as Kasama Central MP.
Meanwhile, JIMMY CHIBUYE reports that the Lusaka High Court has ordered for an inter-parte hearing in a case in which the Patriotic Front (PF) has sued Kasama Central member of Parliament (MP) Geoffrey Mwamba for refusing to resign from the PF despite joining an opposition party.
On Thursday, PF secretary general Davies Chama commenced fresh legal proceedings against Mr Mwambaâ€™s continued stay in the ruling party despite accepting a position of vice-president for administration in the United Party for National Development (UPND).
Mr Chama argued that the court should grant the PF an order of injunction restraining Mr Mwamba from attending parliament and holding himself out as PF Kasama Central MP until final determination of the matter.
But High Court judge Mwiinde Siavwapa yesterday ordered that the case should come up on July 31, this year to hear both Mr Chama and Mr Mwamba.
â€œLet this matter come up for an inter-parte hearing on July 31, 2015 at 09:00 hours,â€ Mr Justice Siavwapa said.
According to a statement of claim filed in the Lusaka High Court registry on Thursday, Mr Chama said Mr Mwamba previously commenced legal proceedings challenging his expulsion from the PF but later abandoned it on Thursday.