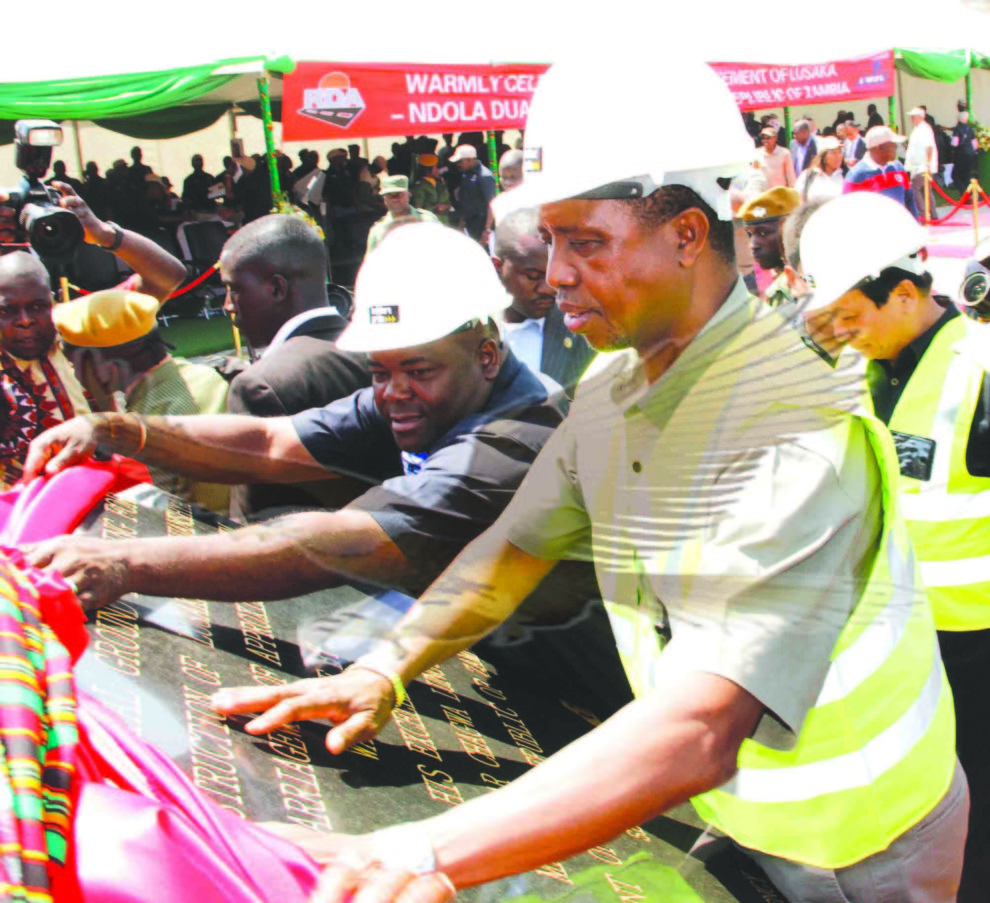 VIOLET MENGO, Lusaka
THERE is a strong positive correlation between a country’s economic development and the quality of its roads.
And for Zambia, Government considers a good road network as critical to the country’s development and places road construction as one of the top priorities on the development agenda.

To this end, many roads across the country have been rehabilitated or paved and new ones constructed to enhance economic benefits and promote road safety.

Among the major road projects that Government has embarked on are the Link Zambia 8000, Lusaka 400 and the famous Mongu-Kalabo road.
These projects are meant to improve livelihoods of the citizens, reduce congestion on roads and time of travel and also enhance road safety.
Recently, President Edgar Lungu commissioned the construction of a dual carriage way between Lusaka-Ndola, a project that will cover a stretch of approximately 844 km in total.
Key aspects of the Lusaka-Ndola dual carriageway
The Lusaka-Ndola dual carriageway covers approximately 321km of road from Lusaka to Ndola passing through Kabwe and Kapiri Mposhi.
The project also includes a 45km-stretch of road from Luanshya-Fisenge- Masangano road.
The total contract sum for the road project is US$1.2 billion and the work will be undertaken by China Jiangxi Corporation for a period of four years.
Scope of work
The project will involve the construction of a new carriageway from Lusaka to Ndola alongside the existing one.
Rehabilitation of the existing carriageway from Lusaka to Ndola, removing of the existing road and making a new one which will also be 321km.
A bridge across the Mulungushi River will be constructed with 56km of bypass roads in Kabwe and Kapiri Mposhi. In real terms, the contract entails the construction of over 844km of conventional roads in total.
Other components of the project include construction of two toll plazas, weigh bridge and three service stations along the way.
The project also involves creation of two satellite towns-one between Lusaka and Chisamba and another between Kapiri Mposhi and Ndola.
Other works include the shifting of the service lines such as Zesco power lines.
According to the Minister of Housing and Infrastructure Development Ronald Chitotela, the construction of satellite cities along the highway is meant to decongest other cities in the country.
“We want to begin creating satellite cities by opening up areas where we feel people must start settling. We have the intention of creating a mini satellite city which will come with these service stations under the same contract between Lusaka and Chisamba and between Kapiri and Ndola,” the minister said at a press briefing.
The minister says the road will meet world standards in terms of quality and will have unique material features of concrete asphalt and double layer, befitting the recommended world standard for a modern dual carriageway road.
The Lusaka-Ndola dual carriageway is part of the regional track road network.
Impact of roads
Mr Chitotela states that the completion of the road will enhance the competitiveness of businesses by reducing road transit time and improving delivery schedules for cargo and passengers.
“Over 5, 000 jobs will be created during the construction and after the construction of the road. This country will also benefit from the mini satellite cities that will be created as they will be able to attract people to invest and work there,” Mr Chitotela said.
Economic Association of Zambia (EAZ) president Chrispin Mphuka says with a good road network, comes reduction in travel time and according people the opportunity to be more productive.
Dr Mphuka points out that good roads also increase the volume of goods transported from one end to the other, which enhances economic development.
“Cost of health bill due to accidents and injuries sustained by people as a result of frequent accidents and loss of life, are likely to be reduced, a positive impact on production,” Dr Mphuka observed.
The dual carriageway is expect to stop head-on collisions of vehicles, and thereby reducing fatalities on Great-North Road.
Transporters and other entrepreneurs are expecting to gain from low maintenance costs of vehicles and preservation of perishable goods by way of reduced transit period of time.
A good road network has potential to open up new markets and enhance trade. This is what is expected from the Lusaka-Ndola dual carriageway once it is completed.
Road Development Agency (RDA) acting director of communications and corporate affairs Anthony Mulowa said the dual carriageway will improve road transport service for energy, mining, agriculture and retail inputs.
This dual carriageway is one of the biggest road projects to be undertaken following the completion of the Mongu –Kalabo road and Mutanda- Chavuma road in the last two years.
The Lusaka-Ndola stretch of Great North Road has claimed many lives in road traffic mishaps, with one fatality taking 53 people on the spot in Chibombo in 2013 when a bus collided with a truck.
The Road Transport and Safety Agency (RTSA) believes the upgrade of the road will bring about road safety.
Head of public relations Fredrick Mubanga said the project is in line with the United Decade of Action for Safety 2011-2020 which aims to stabilise and reduce the forecast of road traffic accidents where
Under the United Decade of Action for Safety are five pillars; road safety management, infrastructure, safe vehicles, road use behavior and post –crash care.
“Government is moving in line with the decade requirement of ensuring road infrastructure is in place to be able to reduce fatalities by 50 percent by the year 2020,” Mr Mubanga said.
He said the future of roads in Zambia looks bright as Government is making efforts to achieve all the five pillars of the United Decade of Action for Safety 2011-2020.
Mr Mubanga is optimistic that the segregation of the Great-North Road into a dual road, will reduction road traffic crashes.
Mazhandu Family transport manager Justine Mazhandu commended Government for embarking on the project, saying a good road will shorten time of travel between Ndola and Lusaka.
“Although the construction of the road will take time, it will surely reduce collisions and enhance safety” Mr Mazhandu said.
At the groundbreaking ceremony of construction works, President Lungu said Government’s resolve to improve Zambia’s road network is very evident.
“When we invest in roads we are not just seeking to create wealth but we are investing in life –saving venture, improving people’s lives and promoting road safety which is a component of public health,” President Lungu said.