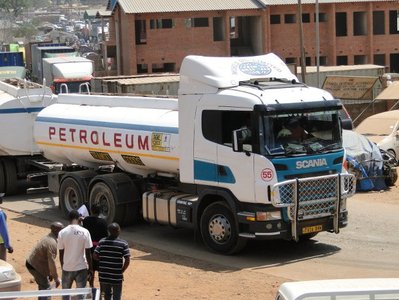 STEVEN MVULA, Lusaka
THE Energy Regulation Board (ERB) has unearthed a scam in which some petroleum transporters are allegedly mixing petrol and diesel with kerosene before delivering the commodities at service stations.
ERB chairperson Geoff Mwape revealed this in Lusaka yesterday during a public hearing on fuel transportation licensing.
Pastor Mwape said ERB is fully aware of what is happening in the petroleum industry, including unscrupulous transporters contaminating diesel and petrol by mixing them with paraffin.
â€œMaybe those who are contaminating fuel and causing confusion are coming from the pirates. We will not spare them, we will expose them and the police will move in,â€ Pastor Mwape said.
But Petroleum Transporters Association of Zambia (PTAZ) president Roberto Sabbadin accused some foreign truck drivers of being behind the illegality.
â€œNoâ€¦noâ€¦no. This no longer happens. It used to be the case sometime back. We used to call it changanya (mixed), but Iâ€™m sure it is the Tanzanian truck drivers who do this,â€ Mr Sabbadin said.
Meanwhile, Pastor Mwape said ERB is also aware of some oil marketing company owners that have political interests and have an agenda to frustrate and embarrass Government.
â€œDonâ€™t entangle yourself in politics. We know your activities and those filling stations with pot holes will be closed even without a letter,â€ he warned.
Earlier, the much awaited public hearing organised by ERB to sort out squabbles in the countryâ€™s petroleum industry was marred by a protest by the PTAZ over allegation that the board favoured foreigners.
PTAZ representatives stormed out of the meeting, claiming that ERB was promoting foreign interests.
â€œWe are not allowed to do business elsewhere in the region and why should ERB allow foreigners to do business here? And since when did we start having public hearings in the petroleum industry? This meeting is a sham!â€ charged PTAZ spokesperson Benson Tembo.
The nearly 150 people that turned up at Government Complex for the public hearing were stunned as Mr Tembo and a handful of others, including Mr Sabbadin, left the meeting.
â€œWe will go and see the minister (of Energy) and we will ensure that he fires this board. For 22 years, such a meeting (public hearing) has never taken place. What are they up to? As locals, we have 497 tankers which are capable of transporting fuel,â€ said a visibly upset Mr Sabbadin.
Back inside, business went on normally as people from various petroleum companies and the public submitted their views on the subject of local people participating.
Later, Pastor Mwape assured the majority of people that had remained in the auditorium that Government wants indigenous Zambians to actively participate in the countryâ€™s petroleum business.
Pastor Mwape, who was flanked by other board members, told the hearing that Government has a deliberate policy of empowering indigenous Zambians and the board has thus taken upon itself to effect the policy.
â€œThe political directive by the Minister of Mines, Energy and Water Development to ensure only locals are allowed is not in contrast with what ERB is doing. This board is about local participation,â€ he said.
He said every company currently participating in the fuel business is duly registered and warned that ERB will not tolerate anarchy in the petroleum industry.
â€œThere is no confusion in the industry. Those who walked out did so in their democratic right. And all those hiding or using Zambians as fronts will be exposed,â€ Pastor Mwape warned.