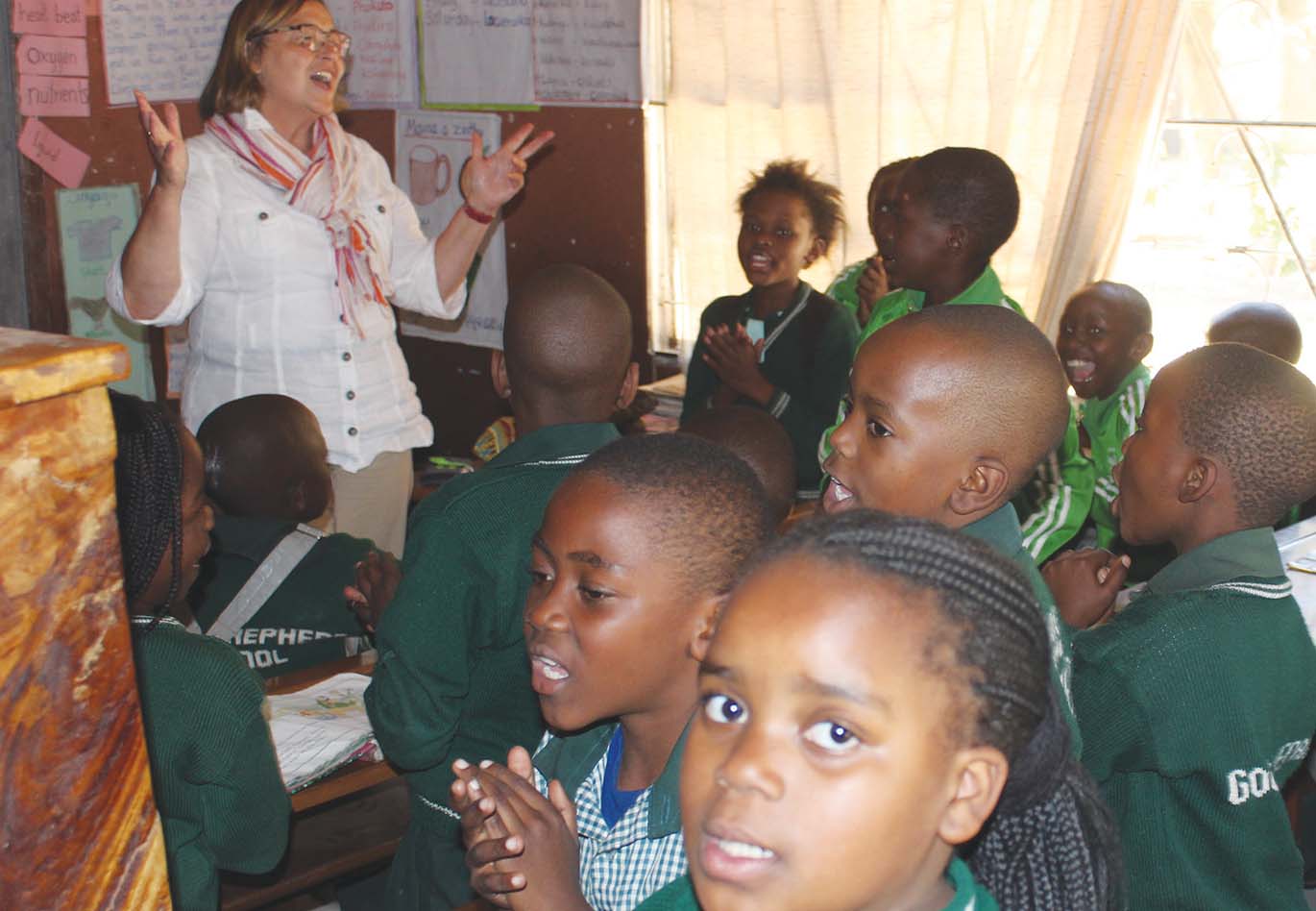 KELVIN KACHINGWE, Lusaka
EVEN before she trained as a teacher, Marie-Christine Escherishâ€™s cherished dream was that one day she would come to Zambia to teach.
Her dream came true this year. Upon retiring from the French Ministry of Education, she found herself teaching French at Our Lady of Mercy school in Mansa, Luapula Province, and then in Kafue at Good Shepherd Nursery and Primary School.
â€œIt was my dream to come to Africa when I was young, about the age of six. I donâ€™t know where the obsession came from, but it has always been strong.
â€œI eventually met a Zambian who worked with Our Lady of Mercy in Mansa. We talked about the project they were involved in, and how it might be good to do something there with my skills in French. Thatâ€™s how I found myself in Mansa,â€ Marie-Christine says.
â€œI would have come earlier, but I didnâ€™t have enough time and much money to enable me travel. But when I retired from the French education system this year, I was able to finally make the trip.â€
After her stint in Mansa, Marie-Christine bumped into Astridah Mwenya, who runs Good Shepherd Nursery and Primary School. From there, they started talking on how they could work together. That is how eventually, she found herself teaching French at Good Shepherd.
Marie-Christine, a mother of four, has enjoyed her time teaching French to pupils doing grades one to four at Good Shepherd School in Kafue.
â€œI have enjoyed teaching the young ones. You can see thereâ€™s real motivation to learn, not just French, but anything else. However, French is an amazing language and culture, and I think that it is important these young children learn it.
â€œLearning French is just like learning music. You donâ€™t teach children music because you want them to become great musicians, but just to broaden their understanding of the world in which they live,â€ she says.
Marie-Christine, whose second language is German, is certainly right; French is no ordinary language.
It is the second-most widely learned language after English and indeed the language of culture – it is the international language of cooking, fashion, theatre, the visual arts, dance and architecture.
Even more, French is both a working and official language of such organisations as the United Nations, International Olympic Committee and international courts, among others.
Oh, and after English and German, French is the third most used language on the Internet, ahead of Spanish.
For Astridah, the proprietor of Good Shepherd Nursery and Primary School, this is why it is important to teach young children French.
â€œFor me as an educationist, Iâ€™m very interested in providing education to people. I strongly believe that is the only way to develop a nation. By exposing and teaching these children French, weâ€™re not just teaching them about a language, but also a culture,â€ she says.
â€œWeâ€™re thinking about the future, so we should not limit what we teach them. Right now, weâ€™re competing for jobs in Zambia, but later it will be within SADC [Southern African Development Community], and then next it will be the AU [African Union].
â€œSo for those able to speak many international languages, it will be an advantage on the international job market.â€
Away from that, Astridah is impressed with the teaching methodologies of Marie-Christine, which she says have ignited an even greater interest in the children at school to learn French.
â€œShe uses a lot of child-centred ways of teaching them, using a lot of activities and in small groups, and that way, the children are never bored. We can only thank her as a school that she agreed to come and teach here. She has certainly added value, and weâ€™ll adopt her approach,â€ Astridah, who worked for a number of international non-governmental organisations (NGOs) before deciding to set up Good Shepherd School, says.
She is passionate about education. In fact, her whole family is. Her late father was a district education officer while her sister, Beatrice Mwenya, runs Good Shepherd School in Kitwe and their brother, James Mwenya, operates Crown Hill in Chipata.
But for Marrie-Christine, her coming to Zambia, and her stay, is a fulfilment of her childhood dream and will be hoping to come back having established some lifelong friendships while here.
â€œI will be going back to France at the end of the month. But first, I will be visiting Kawambwa [in Luapula Province]. But now that I am retired, Iâ€™m hoping that I will be able to return although it is a bit expensive and I have missed my family while here.
â€œIt was very nice to understand the Zambian society. It was good to see the happiness of the children and their parents despite some of them not being rich. This is not the case in France where you have too many complaints. Here people are able to get on even with the little that they have.â€
That is Marie-Christine Escherish, the French woman who has fallen in love with Zambia and its people, especially children.

Family is a bridge to destiny