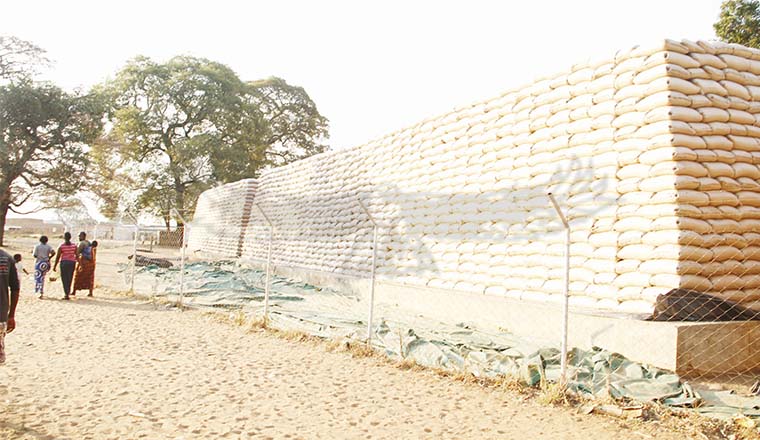 From TEDDY KUYELA and KALONDE NYATI in Mpulungu
THE Food Reserve Agency (FRA) is on course to buying the targeted 500,000 metric tonnes of maize by today, two months ahead of the close of this yearâ€™s crop-marketing season.
The agency has already bought 437, 691 metric tonnes from farmers across the country.
FRA was initially expected to complete buying the 500,000 metric tonnes of maize by October 31.
But FRA executive director Chola Kafwabulula says the agency now projects that the exercise will be completed today.
Mr Kafwabulula said 74,569 metric tonnes of maize had been bought in Northern Province as at Monday, representing the highest stock in the country.
He said the agency, which has since paid the K160 million to farmers out of the K200 million deposited in various commercial banks, has bought about 92 percent of the targeted tonnage.
â€œA total of K200 million has been sent into the banks of which about K160 million has been paid to our farmers but we have also been promised another funding from the government within the course of the week,â€ Mr Kafwabulula said.
FRA has also embarked on an investment plan running from this year to 2018 that will result in storage capacity increasing by two million metric tonnes to ensure the grain is safely transported to storage sheds.
Mr Kafwabulula has also encouraged Members of Parliament (MPs) to take advantage of the project and ensure that Zambians benefit from the project.
He cautioned FRA officers against theft of maize.
Meanwhile, over 50 farmers are stranded with bags of maize in Mungwiâ€™s Chimba area as the poor road network cannot enable them to transport the commodity to the main FRA depot in the district.
The farmers, who have been stuck with their maize since the beginning of the marketing season last month, said transporters are shunning the area due to the bad state of the roads.
Wesley Sinyangwe, a local farmer, said the maize will go to waste as the satellite depot is small and cannot adequately shelter all the maize.
â€œThe satellite depot is small and not properly secured and the maize that keeps piling everyday will rot,â€ he said.
Rosemary Munthali, another farmer, also called on the FRA to quickly address the problem.
â€œWe are suffering, I have been here for more than one week. The bags are getting damaged and maize will rot if it is not transported quickly,â€ she said.
Sara Nanyangwe said it is sad the farmers continue to encounter challenges when selling their maize.
She said poverty alleviation will only be achieved if government effectively facilitates both maize production and marketing. â€˜Zambia has deficiency in nutritionistsâ€™
Fisherman drowns after boat collision