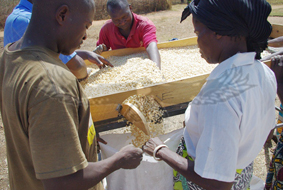 From BUTTYSON KANDIMBA in Solwezi
THE Food Reserve Agency (FRA) has bought 99,077 bags of maize worth K6,935,390, from farmers in Solwezi in North-Western Province.
And Government has so far paid out K3, 723,000 to farmers in the region who sold maize to the agency in the ongoing marketing exercise.
Solwezi district commissioner Crispin Likando disclosed the development.
â€œUnder the Farmer Input Support Programme (FISP), the district has already received 21,080 x 50 kg bags of compound D for the 2014/2015 farming season,â€ Mr Likando said.
On developmental projects, Mr Likando said the construction of an office block in Lumwana by the Solwezi Municipal council at a cost of K3,800,000 is on course and works will be competed soon.
He said the facility once completed will enhance service delivery in Lumwana area.
â€œThis project is scheduled for handover by end of October, this year,â€ he said.
Mr Likando said Government is undertaking several projects in the district in terms of infrastructure, water and sanitation.
He, however, bemoaned the untimely release of funds by the treasury for the implementation of the projects.
Mr Likando further lamented the poor state of roads in the district and appealed to the relevant authorities to consider working on them.