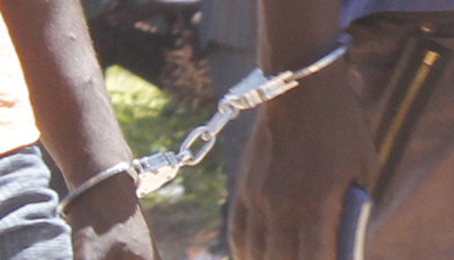 MONICA KAYOMBO, Ndola
Police on the Copperbelt have arrested 31 foreigners allegedly using youth to steal copper from mines for their illegal mining activities. Some of the youngsters used for stealing are as young as 9-years-old.

And Minister of Home Affairs Stephen Kampyongo has said Government will restore order in the mining sector and that no culprit will be spared in the operation.
Last night deportation orders were reportedly being signed to expediently expel some of the culprits.
The operation to restore order includes Government’s assurance to provide maximum security to Konkola Copper Mines (KCM), the main victims of thefts.
Government has also reiterated its encouragement to illegal miners to form co-operatives through which they could operate without getting into conflict with the law.
Speaking yesterday after a meeting with KCM management in Chingola, Mr Kampyongo said Government wants to come up with a holistic approach on how best to meet the expectations of the mining companies and the illegal miners seeking decent lives.
“Our responsibility is to see youths empowered properly, not where you have a category of few youths who are driving big cars using other youths who are risking their lives every day,” Mr Kampyongo said.
He said government is not going to allow “vague investors” to disturb security and it would do its part by ensuring the illegal miners commonly known as ‘jerabos’ operate legally.
“We are not going to allow criminality. Our responsibility is to see our youths empowered properly,” he said.
He said all the foreigners connected to illegal mining activities will be rounded up by law enforcement officers.
He said it is worrying that the youths as young as nine-years–old are being used by unscrupulous people.
KCM chief executive officer Steve Din said the mining company is losing a lot of money through thefts.
He said KCM is willing to work with co-operatives for the sake of orderliness.
In a compressed pictorial presentation made by KCM head of security Max Maoma, the mining company unveiled damage done by illegal miners to the mine’s facilities.
And the illegal miners’ chairman, Douglous Chilembi, said his group is willing to register as a co-operative and get a certificate soon.
Mr Kampyongo went on a fact- finding mission at KCM Nchanga open-pit mine in the company of Inspector General of Police Kakoma Kanganja, Ministry of Home Affairs deputy permanent secretary Willies Manjimela, Copperbelt commissioner of police Charity Katanga and other senior government officials.
Earlier, Mr Kampyongo warned that Government would deport foreign investors on the Copperbelt if it is proved they are bankrolling youths in Chingola and Kitwe to stage criminal activities in the mines and disturbing operations.
Mr Kampyongo said while Government appreciates investors’ contribution to the treasury, it will not allow the vices by using youths to cause disturbances to the operations of the mines.
Mr Kampyongo said this when he paid a courtesy call on Copperbelt permanent secretary Elias Kamanga at the provincial administration in Ndola yesterday.
Two people were shot at when a group of illegal small-scale miners (popularly known as jerabos) forcibly entered the KCM premises in Chingola and disturbed operations.
“For the Government to function, we require revenue and this revenue comes from the legitimate investment that we have and the mining sector has so many people it employs and suppliers who contribute to the economy of this country.
“If you have illegitimate investors who want to subtract from other investment, then they are not desirable. So our approach to this matter is to not only deal with the culprits being sent to disrupt operations, but also those who are sending them,” Mr Kampyongo said.
The minister also said that Government has contacted the diplomatic missions of foreigners involved in illegal activities and the embassies have distanced themselves form any wrongdoings in Zambia.
And Mr Kamanga said the provincial administration is happy that the Minister of Home Affairs was on the Copperbelt when there are criminal activities on the mines.